Home » News » “Cyprus Made”, the new label and logo of authentic Cypriot products

“Cyprus Made”, the new label and logo of authentic Cypriot products 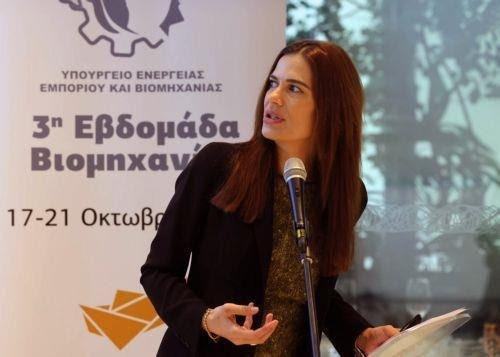 “Cyprus Made” is the new label and logo for authentic Cypriot products, which aims to further increase exports, in the years to come. The exports increased by 50% in the last five years.

The new label and logo, “Cyprus made, Unique by origin”, were presented on Monday during the opening of the “Industry Week” fair by Energy, Commerce and Industry Minister Natasa Pilides.

Speaking at the Conference the Minister said that despite the challenges with COVID-19 and now with the war in Ukraine, the industry in Cyprus is growing and "we hope it will continue to grow at even faster rates than those we have experienced in recent years."

Pilides referred to the new label of Cypriot products and how it can help businesses in Cyprus. She said that this effort to create a common identity of Cypriot products falls in the context of the Ministry's new policy, which includes a study on the prospects of the main export products which is running from 2020 in collaboration with PWC.

The research showed the need to create a targeted action plan to align the policies we follow as a state and the goals of the private sector. With the creation of the "Cyprus Made" label, Cypriot products now acquire their own mark of quality in the international markets, but also within Cyprus, she noted.

“All the data we gathered show continuous and constant increase of Cypriot exports in the years to come. During the first six months of this year, we registered a 21.8% upward trend,” Pilides added. This, she explained, was a positive development that created expectations that the Cypriot industry can now compete with its counterparts in the international market.

She noted that the "Cyprus Made" label constitutes another important tool in the efforts to strengthen the export of Cypriot products. Efforts that have been proven to be moving in the right direction, she said.

Pilides further noted that domestic exports show a significant increase, by almost 50% in the period from 2016 to 2021. She estimated that this increase will continue in 2022, as well.

In the first phase, the label will be granted to industry-made products, such as medicines, plastics, metal structures, cosmetics, electronic equipment and handicrafts, including embroidery and ceramics.

At a later stage, the label will be extended to other categories of products, namely agricultural goods, such as food and wine.

The logo is a composition of lines and triangles which create the image of Cyprus as a mosaic.

“The blocks composing the logo are arranged so that their corners point in all directions, sending the message that Cypriot products can reach the entire world,” Pilides said.