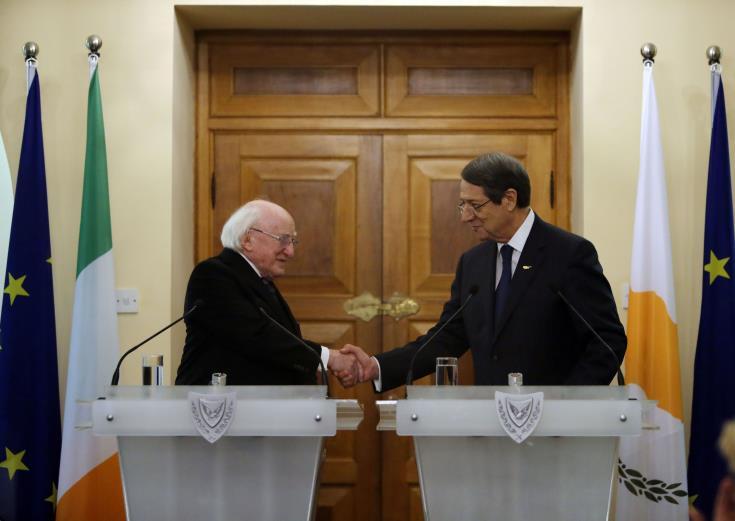 President of Ireland Michael Higgins expressed on Monday his deep concern over what is happening in northern Syria and the unilateral intervention of Turkey in that area, urging Ankara to seek an alternative, negotiated, approach, one that rejects military intervention and its resulting humanitarian distress.

In statements in Nicosia, where he held talks with Cyprus President Nicos Anastasiades, Higgins, who is paying a state visit to the island, also shared Cyprus` concerns over Turkish drilling activities in Cyprus` Exclusive Economic Zone (EEZ) and stressed that his country will continue to support efforts for a Cyprus settlement.

On his part, referring to Turkish illegal activities in Cyprus` EEZ, President Anastasiades expressed hope that during the EU Summit taking place this week, the EU will collectively communicate a firm and strong message to Turkey, and underlined that “our side is determined to exhaust all the diplomatic means at our disposal in order for the Turkish violations to be terminated, in full respect of the unhindered exercise of the sovereign rights of the Republic of Cyprus.”

The two Presidents also discussed, among others, about Brexit, climate change, migration and bilateral relations, underlining in their statements the strong ties between Cyprus and Ireland.

In his statements, Higgins said that it would be remiss not to express his deep concern, as President of Ireland, at which is happening in northern Syria, and the  unilateral intervention by Turkey in that area.

He noted that the possibility of coercion or forced returns of refugees is an appalling one and totally unacceptable, and expressed "in the strongest terms", the position that any attempt at demographic change must appall the international community.  “I urge Turkey to seek an alternative, negotiated approach, one that rejects military intervention and its resulting humanitarian distress,” he added.

Moreover, he noted that he shares “the concern of Cyprus in relation to the recent arrival of drilling and prospecting off-shore. Matters of the maritime and activities at sea should be undertaken under international law and any necessary negotiations undertaken in that context.  And I support very much the reaction of Cyprus in this matter," he added.

Referring to Brexit, he noted that "it has implications for both of our peoples and we have been supportive of each other’s specific national issues."

As to the Cyprus problem he noted that “given our mutual experience of conflict and peace-building, Ireland has traditionally been sensitive to the challenges Cyprus faces in its ongoing search for a resolution of the Cyprus partition issue.  Our sensitivity and solidarity will continue,” he assured.

He said that “knowing that Cyprus’s tireless efforts in search of a settlement will continue, Ireland will do whatever it can to be of assistance in such endeavours, in the hope for lasting peace and reconciliation on the island of    Cyprus,” and stressed that “we will continue to support all of your efforts to reach a resolution that will ensure peace and stability for Cyprus through the establishment of an honourable, balanced and durable settlement.”

Moreover he noted that Ireland has supported the United Nations peacekeeping mission in Cyprus over many decades and has contributed to the Committee on Missing Persons (CMP) work. Moreover, he referred to the maritime links between Cyprus and Ireland as two seafaring nations.

On his part President Anastasiades said in his statements that he had the opportunity to inform President Higgins on the latest developments on the Cyprus problem, as well as regards the latest Illegal and unacceptable actions by Turkey and the intention to conduct exploratory drillings within the internationally recognized and licensed plots within the Exclusive Economic Zone of the Republic of Cyprus.

“Actions which constitute by far the most severe escalation of Turkey’s unlawful activities to date, and another blatant violation of the sovereign rights of the Republic of Cyprus and of international law, while they also pose a threat for the broader stability, peace, and security in the already turbulent Eastern Mediterranean,” he added.

Anastasiades said that he stressed to President Higgins that “our side is determined to exhaust all the diplomatic means at our disposal in order for the Turkish violations to be terminated, in full respect of the unhindered exercise of the sovereign rights of the Republic of Cyprus.”

In this regard, he added, “we are deeply grateful for the active support of Ireland in condemning Turkey’s actions that test our values of upholding international law and the need to abide with the principle of maintaining and promoting good neighbourly relations.”

He expressed hope that during the EU Summit to take place this week, the EU will collectively communicate a firm and strong message to Turkey.

He noted that he had no doubt that in this endeavour and during the talks to follow at the Summit, Cyprus will, yet again, receive Ireland’s full and unwavering support.

Anastasiades extended the genuine appreciation of the Government and the people of Cyprus for the Irish President’s personal interest and strong support to reaching a comprehensive and viable settlement on the Cyprus Problem, in accordance with the relevant UN Security Council Resolutions, international law and the EU acquis.

Moreover he assured that he remains deeply committed to continue his tireless efforts to end the unacceptable status quo and reunite Cyprus.

And the only way to achieve this is not with gun-boat diplomacy, blackmail tactics and attempts to force our side to negotiate under duress, but through an environment of equal-standing and an environment conducive to holding constructive discussions, he added.

Referring to Brexit, he said that it was one of the main issues, since both Cyprus and Ireland will be significantly affected by the UK’s exit from the EU.

"I have listened with interest to President Higgins on the latest developments and the implications that Brexit will have on Ireland, and I reiterated our unwavering solidarity with Ireland on this sensitive issue," he noted.

He went on to say that  Cyprus stands firmly in support of the EU commitment to protect the all-island economy of Ireland, as well as the EU Single Market and, most importantly, the Good Friday Agreement and the peace process.

Referring to the bilateral relations between Cyprus and Ireland, Anastasiades said that he and Higgins did not only reaffirm the excellent co-operation and synergies that the two countries have established both bilaterally and multilaterally, but also exchanged ideas “on the need to further strengthen our  beneficial partnership, particularly in the fields of trade, investment, tourism, higher education.”

We also discussed a wide range of issues of mutual interest and of concern, particularly migration, climate change and the future of the European Union, he added, noting that he informed President Higgins of the initiative undertaken by Cyprus for coordinating regional climate change actions, taking into account particularly alarming projections concerning the impact of climate change on the Eastern Mediterranean and Middle East.

On the issue of migration, he said that “we both agree that the management of migratory flows continues to pose one of the most serious challenges that our Union is faced with.  This requires long term solutions combining more effective control of the EU’s external borders, increased external action and strengthened internal cooperation.”

"In addition, it should be taken into account that the Southern European Union Countries are not only at the forefront of migratory external pressures, but they have been experiencing a continuous increase of migratory influx and of asylum applications," Anastasiades noted.

He went on to say that “while not excluding the possibility of new unprecedented waves of refugees following Turkey’s unacceptable intervention in Syria, we strongly believe that shared responsibility and solidarity with those most affected must underpin the EU’s common Migration Policy.”

A navigational telex, published on the website of the Joint Rescue and Coordination Centre (JRCC) stationed in Larnaca, also warned all those working on "Yavuz" and its supporting vessels that they will face consequences and an international arrest warrant will be issued against them.