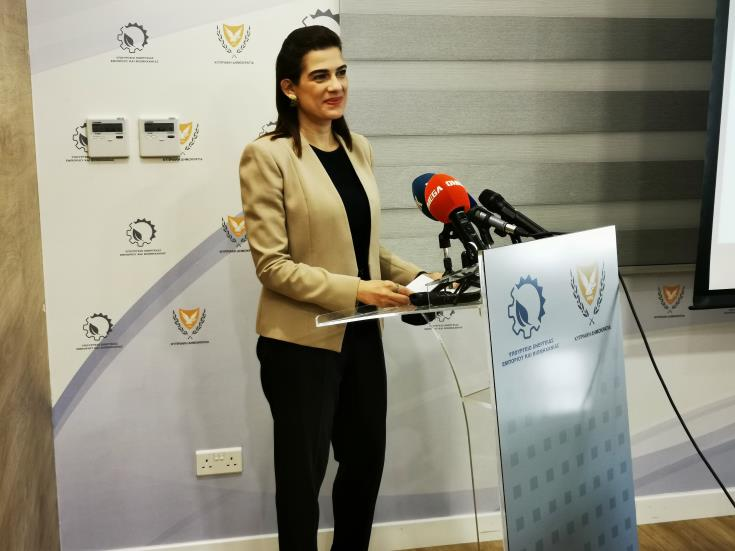 Cyprus proposed a series of measures to alleviate the impact of rising energy prices that will be implemented earlier than other EU countries, Minister of Energy, Commerce and Industry Natasa Pilides has said.

Briefing the parliamentary committee of Finance and Budgetary Affairs on her Ministry’s budget for 2022, Pilides said that Cyprus had the second lowest rise in electricity costs in the EU but was one of the first countries to implement a 10% reduction in electricity bills for four months, as well as introducing a series of measures prompting households and businesses to adopt green policies.

“Surely the aim of these measures should be green transition apart from cost reduction,” she added, noting that adopting green practices that would reduce the electricity cost constitute the best measures for all.

Pilides also said the Ministry has studied the EU tool box to tackle the impact of rising prices and held meetings aiming to long-term measures and a shift to green growth, while she added that the absence of natural gas from Cyprus energy mix contribute to a more subdued rise in energy prices, as natural gas prices have surged recently.

Replying to a question whether she is concerned over Turkey’s reaction in view of a scheduled appraisal well by Exxon Mobil to Cyprus block 10, she said these reactions will be tackled and are being tackled.

“We hope the appraisal well will yield positive results and will confirm the reserves which were located in the exploratory well,” the Energy Minister said. The exploratory drilling in Glaucus in block 10 carried out in 2019 revealed an estimated natural gas reserve of 5 to 8 trillion cubic feet. (tcf).

Responding to criticism over the delay in the development of the Aphrodite gas reserve in block 12 and the joint exploitation agreement with Israel, Pilides said the two countries are in a process of arbitration over reserved believed to cross from Aphrodite to the adjacent Yishai gas field in the Israeli EEZ, adding under the process the dispute will resolved within a timeframe of six month.

However, she noted that the block 12 contractors can proceed with their contractual obligations irrespective of the dispute.

With regard to a possible construction of a natural gas liquefaction plant in Cyprus, the Minister said this possibility has been discussed with ExxonMobil which intends to construct an LNG plant if the necessary natural quantities exist and noted that “indications with the companies is that a pipeline to Egypt is the preferred choice.”

Furthermore, Pilides said the Ministry will absorb €32.5 million from the National Recovery and Resilience Fund in 2022, with total funds allocated to the Ministry in the period of 2021 – 2026 amounting to €336 million and additional €209 in EU funds for the period of 2021 – 2027, of which 61% will be allocated to green economy, 38% to businesses and the remaining amount in infrastructure.

Our efforts for 2022 is to provide incentives to businesses, households and the public sector as well that will combine entrepreneurship, growth and the transition to a green economy, the Minister concluded.