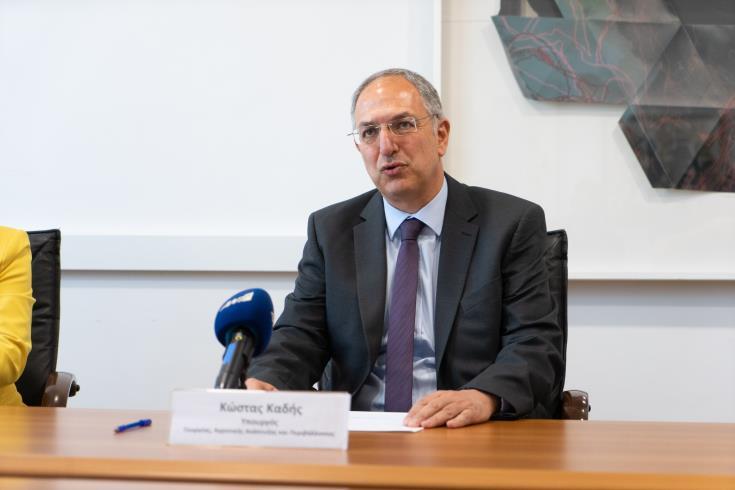 The utilisation of hydrocarbons and the transition to clean energy are among the Cyprus government strategic goals, Minister of Agriculture, Ruran Development and the Environment Costas Kadis has said calling for regional cooperation to safeguard the sustainability of the region which is vulnerable to climate change.

He emphasized that “every single country of the Eastern Mediterranean and the Middle East is considered particularly vulnerable to the projected impacts of climate change which may bring further social unrest, conflict and mass migration.”

“Taking immediate actions at regional, national and international level is vital for the sustainability of our region,” he said, adding that having this in mind, 42 ministers of the Union for the Mediterranean have recently signed a declaration on energy, underlying their commitment to decarbonise the energy sector.

“This was an important step which confirm our intention to set a new clean energy transmission pathway for our region through collaboration,” he went on to say.

Furthermore, Kadis said that the utilisation of hydrocarbon and the transition to clean energy are among the strategic goals of the government of Cyprus within the framework of the European Green Deal.

“Our goal is to achieve a sustainable, clean energy transition through a post-COVID-19 recovery pathway in line with the UN Sustainable Goals and the Paris Agreement objectives, our commitment is to achieve zero green house emissions in 2050,” Kadis added.

Moreover he noted that oil and natural gas exploration “created promising prospects in the Mediterranean Sea especially the eastern basin, enhancing the role the Mediterranean Region can play in the European energy market.”

“By claiming a key position in the regional energy map our country will have a fundamental role to play for upgrading the wider Mediterranean area into a region of sustainable development and low carbon emissions, within this role we are taking a serious commitment towards the safety and sustainability of the Mediterranean Sea,” he said.

However, he noted that “to ensure these values all the Mediterranean countries, especially those dealing with the offshore hydrocarbons industry should cooperate in adopting a common vision and common strategy concerning this field of activities.”

According to the Minister, the Ministerial Declaration of the Union of Mediterranean on Energy in June 2021 as well as the forthcoming decisions at the ongoing UN Climate Conference COP26 are critical not only for the sustainable development of our region but also for supporting the sustainable and clean energy transition worldwide.

“We have reached a critical point in time, a point in time where words must give way to action. Our scientific community, our business and industrial sectors as well as our policy makers and world leaders must work together to safeguard the environment and build a sustainable path for the future,” Kadis concluded. 24/05
Lebanese banks’ branches in Cyprus to shut down
24/05
European official warns Cyprus that money would be lost
25/05
Installation of photovoltaic systems grants increased by 50%
24/05
bbf: new real-estate development brand launched by Prime Property Group aims to build a better future across the world

25/05
Installation of photovoltaic systems grants increased by 50%
25/05
Grant Thornton Cyprus sponsored the “Mental Health at Work” talk
25/05
President: Labour Minister's case difficult
25/05
President of the OSCE PA in Cyprus on for International Conference on corruption
25/05
Up to 5 million euro from the EU to support the farming sector