Bulgaria wishes to cooperate in energy sector with Cyprus 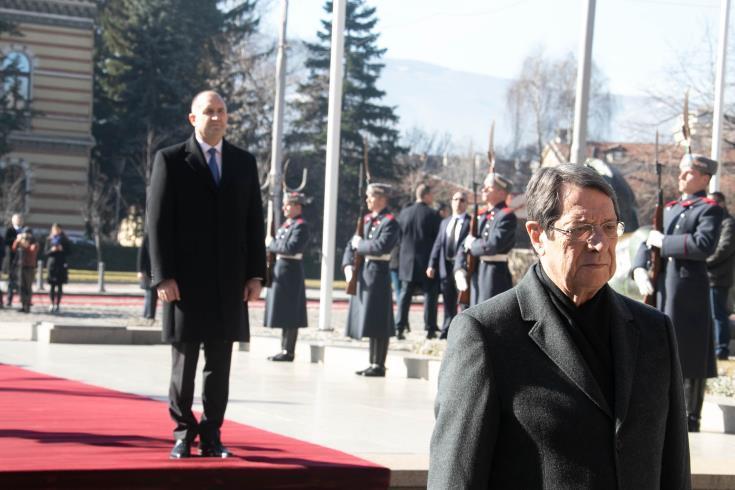 Bulgaria`s President Rumen Radev said on Tuesday that his country wishes to cooperate within the framework of the trilateral mechanism among Cyprus, Greece, and Israel in the energy field, adding that Bulgaria is geographically a natural continuation of these three countries.

Radev was speaking after a meeting he had with Cyprus President Nicos Anastasiades, who is paying Bulgaria a two day official visit, a presidency press release issued here today says.

In the morning, President Anastasiades was officially welcomed in a ceremony at the Alexander Nevski square where a coat of arms guard was presenting honours. The national anthems of the two countries were performed and the President laid a wreath at the Monument of the Unknown Soldier.

Later on, the two Presidents held a private meeting followed by expanded talks between the delegations of the two countries.

In his remarks to the media afterwards, President Anastasiades noted the mutual will of the two countries to further strengthen their bilateral relations in all fields.

He thanked Bulgaria for its support to the people of Cyprus following Turkey`s military invasion of the country in 1974, as well as for its principled stance with regard to the solution to the Cyprus problem, and pointed out his readiness to enter into a resumption of the negotiations for a solution.

President Anastasiades also said that he briefed his Bulgarian counterpart on the Turkish provocations both with regard to the Exclusive Economic Zone of the Republic of Cyprus and the fenced city of Famagusta, which has been occupied by Turkey`s troops since 1974.

He added that the two countries share common positions with regard to matters of EU concern such as the MFF and Migration.

Referring to the trilateral mechanism with countries in the region, the President said that no country that respects international law and the sovereignty and independence of states, is excluded from these mechanisms.

On his part, President Radev said, among other things, that his country wishes to enhance its relations with Cyprus, particularly in the fields of energy, economy, and investments.

He also referred to the long relations between Cyprus and Bulgaria, stressing his country’s principled and firm stance on the Cyprus problem.

Radev also said that Bulgaria wishes to cooperate within the framework of the trilateral mechanism among Cyprus, Greece, and Israel in the Energy field, adding that Bulgaria is geographically a natural continuation of these three countries.

Welcoming him, Prime Minister Borissov expressed the wish of his government for further strengthening the already excellent relations with Cyprus in all fields, including energy.

On his part, the President said that the existence of more than 30 bilateral Agreements and Memoranda of Understanding are proof of the strong relations between the two countries, and thanked Borissov for Bulgaria’s position on the Cyprus issue as well as for its contribution to the UN peacekeeping force in Cyprus.

He also said that “our aim and expectation is to achieve synergies in the field of energy for the benefit of the states in the region, the press release concludes”. 03/04
The Virus Will Force Europe to Make a Decision About Italy
03/04
No political considerations in Russia's request to amend double taxation avoidance agreement
03/04
What does leverage resilience mean and why is it good for businesses?
03/04
Cyprus high-tech and Fintech companies donate 1,000,000 euros to support the local hospitals

03/04
Cyprus high-tech and Fintech companies donate 1,000,000 euros to support the local hospitals
03/04
No political considerations in Russia's request to amend double taxation avoidance agreement
03/04
One more patient dies of covid19, 36 new cases on Thursday
03/04
What does leverage resilience mean and why is it good for businesses?
03/04
Greek Fin Min in Parliament: The Burden of the Health Crisis Is Fairly Distributed