Cyprus and Lebanon to negotiate agreement for hydrocarbon reserves 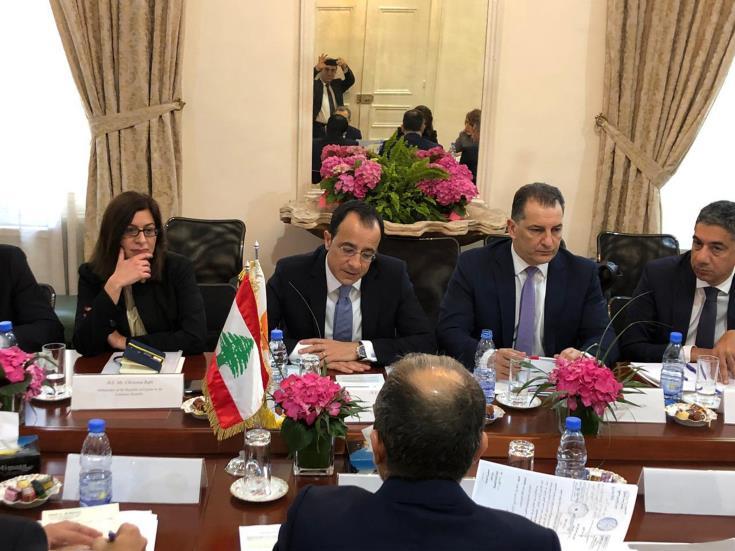 Cyprus and Lebanon agreed to commence negotiations in order to conclude a framework agreement regarding the development of hydrocarbon reserves extending in both sides of the median line between their respective exclusive economic zones (EEZ).

According to a Foreign Ministry announcement, the Minister of Foreign Affairs Nikos Christodoulides, together with the Minster of Energy, Commerce, and Industry Yiorgos Lakkortypis, met on Thursday, in Beirut, with Lebanon’s Foreign and Energy Ministers, Gebran Bassil and Nada Boustani, respectively. Among others, they discussed issues pertaining to the cooperation between Cyprus and Lebanon in the energy and energy security sectors in the broader region of the Eastern Mediterranean.

Speaking to the Press after the meeting, Christodoulides said that together with the Ministers they had the chance to review bilateral relations and look into ways to broaden and deepen them further, for the benefit of both countries and their people. He added that together with the competent Ministers from both countries they had a thorough, results-oriented discussion on energy matters.

The results of hydrocarbon exploration, both in Cyprus, as well as in Lebanon, leave us particularly satisfied, Christodoulides said, and referred to the interest large international companies display in investing in the EEZ of both countries.

The Foreign Minister of Cyprus also noted that Ministers reaffirmed their mutual support for both countries exercising their sovereign rights to explore and exploit their natural resources, located in the respective maritime areas, in line with international law and in particular the UN Convention on the Law of the Sea, to which both countries are signatories.

Cyprus respects and supports the sovereign rights and the jurisdiction of all countries in the region, including Lebanon, within their maritime zones, on the basis of international law, he added.

Christodoulides further said that they agreed over the need to utilize the impetus following energy developments in the region, and use it as a catalyst to enhance bilateral cooperation further. In this respect, he said, we agreed to immediately commence talks to conclude a bilateral Framework Agreement regarding the development of hydrocarbon reserves extending in both sides of the median line between the EEZ of both countries.

According to the Minister, such an agreement would send a strong message for cooperation between the two countries, providing international companies, wishing to invest in the exploration of hydrocarbons in the area, with the necessary legal security.

He also noted that the two sides agreed to start discussions to conclude an agreement for the protection of underwater cultural heritage from illegal excavations, within the respective areas of jurisdiction of both countries. Christodoulides also said that he looks forward to signing a bilateral agreement with Lebanon on search and rescue activities.

The Foreign Minister congratulated Lebanon for the generous hospitality of 1.5 mln refugees from Syria and announced the donation of €50 thousand, on behalf of the Republic of Cyprus, in order to strengthen programs that aim at improving access to education for young disadvantaged Lebanese girls.

The Foreign Minister also assured that Cyprus, which has also been affected by turbulence in the broader region, will continue to support Lebanon in addressing the challenges that add a disproportionate weight on the country, both on a bilateral level as well as through EU channels.

He thanked finally Gebran Bassil for his hospitality and noted that the Beirut visit is indicative of Cyprus’ resoluteness to cooperate with Lebanon in addressing the common challenges and in defining a stable path to secure a peaceful future, with prosperity for both countries and the region.