Cyprus determined to go ahead with energy strategic plans 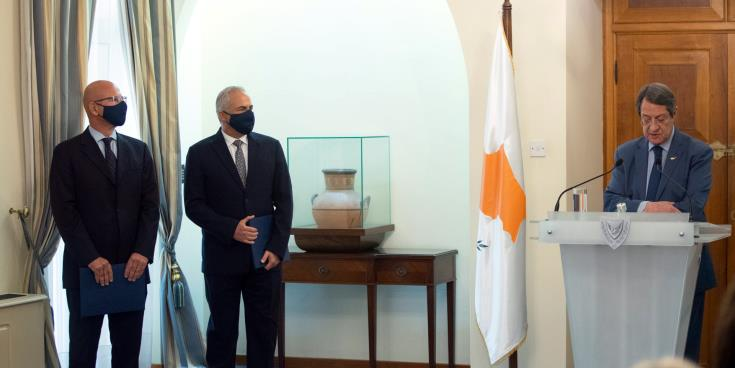 President of Cyprus Nicos Anastasiades said on Friday that the government stands ready and determined to go ahead with its strategic planning as regards the energy sector, despite Turkey’s provocations in its exclusive economic zone.

Speaking during a ceremony at the Presidential Palace for the re-appointment for a course of 7 years, of the members of Cyprus Energy Regulatory Authority (CERA), the President noted that the government will continue its initiatives for upgrading and enhancing the energy collaboration with countries in the Eastern Mediterranean and in Europe and with the implementation of a number of important agreements with third countries and companies.

He noted that energy could be the catalyst for regional cooperation on the basis of the international law and the law of the sea as well as the principles of good neighbourhood, promoting the efforts for stability and security.

The President referred to the «East Mediterranean Gas Forum», in which Cyprus is a founding member and with the participation of Egypt, Greece, Israel, Italy, Jordan, Palestine and France and with the aim to set up a viable and sustainable natural gas market in Eastern Mediterranean.

He said that all the above reflect our priorities for energy to become a source of wealth and security for the citizens and the generations to come.

The President praised the role of CERA in promoting the energy strategy of the government adding that this strategy, through a comprehensive planning, aims to create conditions of competition in the electricity market and in order for Cyprus to exit the energy isolation with agreements which are mutually beneficial for the countries in the region as well.

He also referred to the recent bills passed by the House about the energy market. The President called on all citizens who fall into the category of vulnerable groups to make use of the discounts offered in electricity which reach 20%.

The President also said that due to the rise in fuel prices all over Europe, Cyprus decided to make deductions of 10% in electricity bills. Anastasiades also spoke of the national strategy for energy and climate 2030, the net zero carbon emissions by 2050 , the completion by 2025 of the installation of 400.000 smart meters of 35 mln euro.

He also referred to the set up of the One-Stop-Shop to accommodate all those who want to get involved with project for renewable energy sources adding that Cyprus has reached its goals for RES consumption.

The President said that an amount of 269 mln euros will be used for reforms, investments and funding in the framework of an energy scheme announced by the government. He also referred to EuroAsia Interconnector project, the EastMed and EuroAfrica Interconnector and the foundation of infrastructure for liquefied natural gas of 289 mln euros of which 101 mln came from the Connecting Europe Facility mechanism.