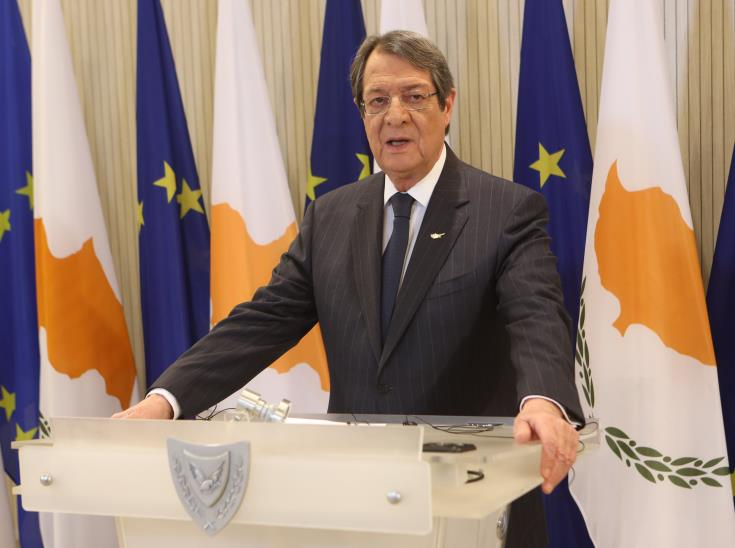 President of the Republic Nicos Anastasiades has stated that Cyprus could transport natural gas sooner to the EU if Brussels supported the construction of the necessary infrastructure.

He made the remarks in Sunday’s online edition of the German ‘Welt’ newspaper where he said the EU has already signed an agreement of intent with Israel and Egypt that it wants to support the transport of natural gas from these countries and also from the natural gas resources of Cyprus. This way there could be a mechanism that would encourage business people to construct faster the necessary infrastructure, the President added.

Welt notes that the extraction of natural gas from Cypriot shores is still in the preparatory stage and international companies such as Chevron, Shell, Eni, Total and Qatar Oil are already taking part.

Extraction of natural gas is scheduled to commence in 2027 and that the EU wants to become independent from Russian natural gas and find non-problematic suppliers, it adds.

President Anastasiades said currently, Turkey’s aggressive stance in the Cypriot EEZ is the fundamental obstacle in commencing the production of natural gas.”

He said “Turkey does not recognise the Republic of Cyprus, violates international law of the sea and is carrying out illegal drilling in front of our shores.”

Cyprus has been divided since 1974, when Turkey invaded and occupied its northern third. Turkey does not recognize the Republic of Cyprus, an EU member since 2004, and considers a portion of the island’s exclusive economic zone (EEZ), as its own or belonging to the illegal regime, set up in the northern Turkish-occupied part of Cyprus.

Ankara sent on several occasions its seismic research vessel “Barbaros” to Cyprus’ EEZ, following the Republic of Cyprus’ decision, in 2011, to start exploratory offshore drilling. After May 2019, two Turkish drill ships, “Fatih” and “Yavuz”, conducted unauthorised hydrocarbon drilling activities in the Eastern Mediterranean, at times in areas licensed by Cyprus to international energy companies. A third ship, “Kanuni” was eventually sent to the Black Sea, while Turkish officials announced that the country’s fourth ship, “Abdülhamid Khan” prepares to search for natural gas in the Mediterranean.

In the past, the European Council called on Turkey to abstain from renewed provocations or unilateral actions in the Eastern Mediterranean, in breach of international law. The EU also expressed determination to use the instruments and options at its disposal to defend its interests.