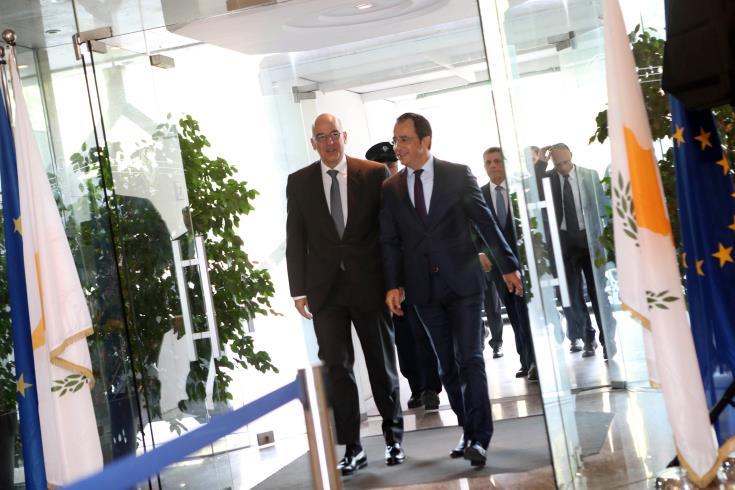 In an interview with the Greek radio station “Alpha Radio”, on Monday, Dendias reiterated that Cyprus is a sovereign EU member state. He underlining that the Turkish actions in Cyprus’ EEZ constitute a violation of the sovereign rights of the Republic of Cyprus.

Dendias argued that Turkey is behaving as a disruptive actor in the region of the Eastern Mediterranean, adding that Greece will not follow this path.

Commenting on a recently published photograph, where Turkish President Recep Tayyip Erdogan stands before a map which presents half of the Aegean Sea as a Turkish territory, Dendias underlined that each state’s borders are concretely defined by the International Law, not by any communication rhetoric. “Such communication strategies cannot alter international legality but rather consolidate the image of Turkey as a country that violates legality”, Dendias stressed.

“Greece is not willing to follow Turkey neither in the path of the `balkanisation` of the region nor in the path of regional provincialism”, Greek Foreign Minister said, calling on Turkey to comply with the International Law.

In response, EU Foreign Ministers endorsed on 15 July 2019 measures concerning Turkey’s illegal drilling in the Exclusive Economic Zone (EEZ) of Cyprus. In accordance with the 20 June 2019 European Council conclusions, Foreign Ministers also invited the High Representative and the European Commission to continue working on options for targeted measures in light of Turkey’s continued drilling activities in the Eastern Mediterranean.