Home » News » New measures in support of businesses and employees

New measures in support of businesses and employees 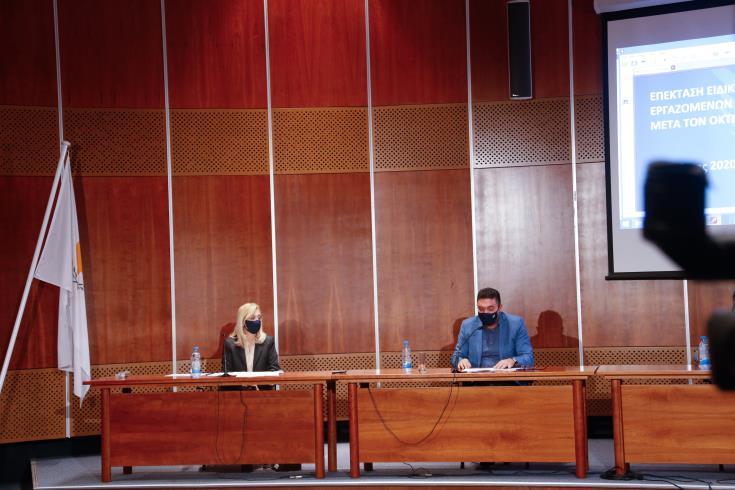 Cyprus Finance Minister Constantinos Petrides and Labour, Welfare and Social Insurance Minister Zeta Emilianidou announced on Thursday a new package of measures in support of businesses and employees who will be affected by measures in place to contain the COVID-19 pandemic.

The measures include an employee subsidy scheme, a business subsidy scheme and a six-monthly extension of a suspension scheme on business and mortgage interest rates until June 20, 2021.

Addressing a press conference Emilianidou said that the schemes announced today would mean an additional expenditure of about €30 million per month, that public expenditure on such support schemes from the beginning of March will exceed €700 million, as well as that over 190,000 employees have benefited from the schemes.

Emilianidou also said that the government “stood by every employee, every person who needed it,” adding that “we will continue to do so, always having in mind the public good while responding to this difficult period Cyprus is undergoing.”

Petrides said that the pandemic’s development at both a national and a European level “justifies our forecasts and the policy we have followed until today.”

According to the Minister of Finance, the pandemic’s “economic impact would have been far greater had the government not acted with foresight and determination, adopting a multitude of support measures, in a targeted manner, depending on the needs the pandemic created.”

Replying to questions he said that the state budget for 2021 will not be amended as it has already been prepared to respond to the pandemic and that the situation right now does not call for a public sector payroll cut, but rather that the government is focusing on supporting private demand and consumption. “We have not reached the point of cuts,” he noted.

The Finance Minister spoke of a flexible and cautious policy followed so far which has been successful and expressed his optimism that next year the economy will recover and will record strong growth.

The employee subsidy scheme concerns businesses which will have to suspend operations until the end of November, Emilianidou said.

Businesses which can show that their turnover will shrink over 80% will be treated equally with businesses suffering a full suspension of operations.

Emilianidou said another two schemes concern people who will not be able to mover between districts for work purposes making them eligible for a special subsidy equal to 60% of their salary equivalent.

She also announced that special teams will be operational to service the needs of vulnerable people whose parents are residing in a different district.

Petrides announced that businesses the operation of which had been suspended since March and take part in the Labour Ministry’s schemes will be eligible for a lump sum rent and operational costs subsidy.

Businesses and self-employed people the operations of whom have been suspended or their turnover has shrunk over 80% and take part in the Labour Ministry’s schemes will also receive a rent and other operational costs subsidy.

27/01
Demetriades: Cyprus is now a quality shipping hub
27/01
All government departments ready for presidential elections
27/01
The UK led the world in open banking — and then got left behind
27/01
Economic sentiment in Cyprus further improves in January