Home » News » FinMin: Increasing corporate tax should not be looked at as a 'taboo'

FinMin: Increasing corporate tax should not be looked at as a 'taboo' 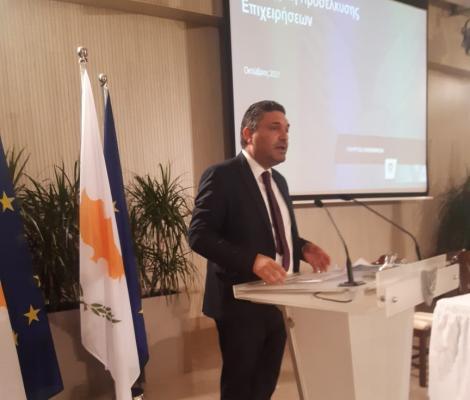 Finance Minister Constantinos Petrides said on Thursday that increasing corporate tax should not be viewed as a "taboo" after the agreement at international level, for the imposition of a minimum global corporate tax rate of 15%.

Speaking at his annual lecture at the School of Economics and Management of the University of Cyprus, the Minister said that an increase that will be part of a more comprehensive, fiscally neutral tax reform, safeguarding the competitiveness of the Cyprus economy and protecting it from damaging the country`s reputational risk, something very important for an open economy.

It is for this reason, he said, that Cyprus welcomed the agreement of the Organisation for Economic Cooperation and Development (OECD) on October 8 and will work constructively at an EU level, safeguarding its own interests in the framework of fair competition.

In addition, Petrides said that in the coming period, we should handle the challenge on a series of issues that are creating changes, distortions or impacts in the labour market, adding that raising funds from European sources and programmes is the government’s priority. However, he said that Cyprus not only requires money to progress but reforms.

Referring to the challenges for the labour market, the Minister of Finance said that these include the continuous evaluation of the state`s subsidy policy in order to help those who are really in need, without being a disincentive to work or creating the so-called "unemployment trap" or black labour, the establishment of a minimum wage, the better and more flexible use of asylum seekers,  flexible labour market arrangements for third-country nationals and the reform of the education system to remedy the skills shortage in different professions.

Regarding the handling of the finances during the pandemic and the economy’s prospects, Petrides said they were recently confirmed by the International Monetary Fund and allow us to be optimistic.

He said the COVID-19 crisis will not turn into a debt crisis which he believes is a possibility for some countries but not for Cyprus, noting that continuous increase in borrowing and increasing debt is not an option.

For this reason, he added, our policy continues to be the significant reduction of public debt in the post-pandemic era.

The state budget already foresees a reduction in the fiscal deficit from 5.0% in 2021 to 1.1% in 2022, he noted and underlined that "over-indebtedness" cannot be a solution for either the private or the public economy in the long term, especially in a country with relatively high rates of both private and public debt.

On the policy of low and even negative interest rates implemented in recent years by Central Banks, the Finance Minister said that this policy has supported and continues to support the global economy since low borrowing rates help both households and businesses receiving funding. However, he questioned, "whether these investments are sustainable and meet the potential of the market”.

The Finance Minister also said that in the midst of the pandemic, during which economies around the world are trying to recover, the new challenge we are facing is the general rise in prices and especially the price of electricity, which in turn raises the prices of thousands of other products and raw materials and erodes the disposable income of hundreds of millions of people, jeopardizing the recovery of economics.

Minister Petrides said we should not rule out the possibility that part of the inflationary pressures may also be created because of the excessive money supply in the market and not solely for reasons of reduced supply.