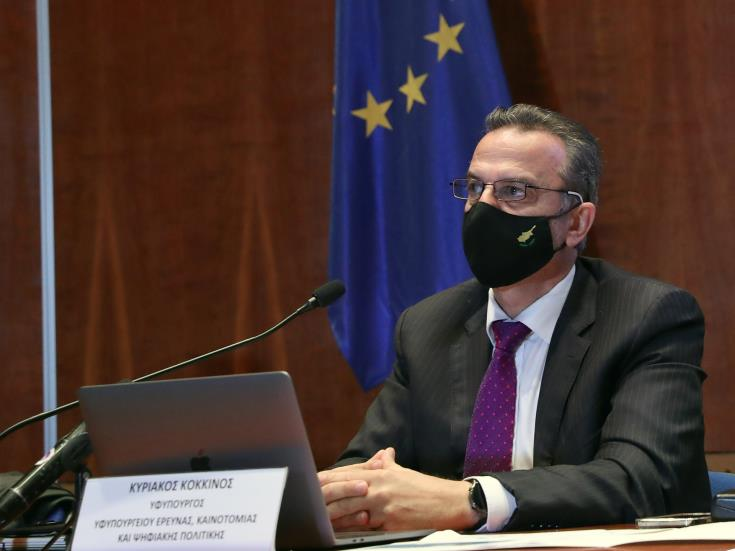 Cyprus has evolved in the recent years as a technology hub in the region and we have to reconsider infrastructural and other inhibitors so that Cyprus becomes an established technology hub on a lobal level, said Deputy Minister of Research, Innovation and Digital Policy, Kyriakos Kokkinos.

Speaking during the Economist Summit in Nicosia, Kokkinos said that Cyprus’ strengths are very obvious, namely its geographic position, its ease of doing business, the quality of life, a peaceful and very friendly place to do business, but at the same time we need to acknowledge the things we need to address in order to make this sustainable and grow further.

According to the Deputy Minister, areas for improvement include the availability of talent, infrastructural elements, like housing and schooling for hosting more international companies, and the environmental impact, which is not sufficiently tackled at the moment.

In his live online intervention, Cameron Brooks, General Manager for Europe Public Sector at Amazon Web Services, underlined the potential of cloud computing to improve people’s lives and betterment of society in Cyprus and the Eastern Mediterranean.

He said that as the world’s first and most broadly adopted platform, AWS is expanding its presence in the Eastern Mediterranean as well, such as the creation of an AWS Local Zone in Athens or the project to turn Naxos into a smart island.

As regards Cyprus, Brooks reminded that AWS has signed a memorandum of understanding with the Deputy Ministry of Research, Innovation and Digital Policy aimed at supporting the modernization of state infrastructure and speeding up the adoption of cloud services in Cyprus, by both the public and the private sector.

“Boosting Cyprus’ transition to the cloud is an integral part of the country’s digital agenda and a key lever advancing its posture as a regional tech and data hub. The MoU provides for facilitation and support through all necessary activities towards a holistic cloud-first policy, including strategy and procurement, capacity building, security”, he added.

Brooks also highlighted the deployment of a wide range of upskilling and reskilling training initiatives as part of the AWS Educate programme which will allow the acceleration of cloud-related learning and promote the development of a cloud-ready workforce, adding that AWS will promote and facilitate cloud adoption by SMEs and technology start-ups in Cyprus through a number of AWS programmes, aimed at creating company-specific cloud adoption frameworks and roadmaps.

The main challenge in the Eastern Mediterranean for governments, cities and other public entities is the need to build secure, scalable and cost-efficient solutions, while many regions also face a shortage of digital skills and this is why AWS encourages lifelong learning in order to ensure that digital innovations do not overtake human resources, he continued.

Brooks said that another issue is the concern related to sustainability and energy consumption and in this respect, AWS supports the sustainable use of technology and is committed to running their business in the most efficient way to reduce our impact on the environment.

“We are excited by the impact our investments can bring in the region and we can see countries worldwide leveraging the cloud, gaining in cost, data security and accessibility for citizens and businesses. This can also happen in the Eastern Mediterranean, we can see the potential of the region, including cities that can harness the power of the Internet of Things, machine learning, artificial intelligence and more to offer innovative services and applications across transportation, healthcare, the environment and more”, he stressed.

Brooks added that AWS wants to bring this whole experience and know-how to the region and Cyprus and as the Cypriot government is making significant steps to modernize services for citizens, AWS is encouraged that the country is ushering a new era of innovation.

“AWS is ready to support modernization and digital skills building. We believe that the Eastern Mediterranean region can become a digital transformation and smart infrastructure model that will be followed by other countries. We want to be part of the major effort underway, offering tools and solutions and know-how for projects worldwide”, he concluded.

For his part, Angelo Mazzetti, Meta’s Head of Public Policy for Italy, Greece, Malta and Cyprus, said that Meta is investing heavily in building technologies that they think is the next chapter for the internet, namely the Metaverse, where people will be able to connect and express themselves more naturally with a feeling of presence and thanks to a world of interconnected virtual experiences.

He added that within the next ten years Metaverse will be able to host hundreds of millions of dollars of digital commerce and these technologies will change the way in which we work and will support jobs for millions of creators and developers, while the social benefits will be also fast.

“We deeply believe that there will not be a single company operating or designing the Metaverse because its key feature for success will be for it to be open and interoperable. For this to happen we need policies, digital frameworks and infrastructures will be key. We need the right regulatory framework that consists of clear rules, that allows companies to plan long-term investments and commitments. We also need to further promote the Digital Single Market with harmonized EU-wide rules that can foster innovation and legal certainty, as well as an open transatlantic partnership”, he stressed.

Eastern Mediterranean countries and Cyprus in particular have the opportunity to champion this pro-innovation approach within the European institutions, continued Mazzetti, adding that the right infrastructure also allows to build the best ecosystem for the digital economy to thrive.

“Cyprus is committed to boosting the digital economy, as set out in the 2025 digital strategy, and this can only be achieved if the entire society and economy works together towards this objective. We need everyone involved, from companies to institutions, to make sure that the region can have a growing innovation ecosystem in the coming years”, he concluded.

During the discussion that followed with business representatives from Cyprus and abroad, issues, such as the difficulty in issuing work visas for foreign nationals or the long period needed for their naturalization once in Cyprus, were raised.

Deputy Minister Kokkinos said in response that the visa issue is something that the government is trying to find ways to overcome, with its Schengen dimension being influenced by external factors.

Internally though, he continued, the business facilitation unit for accelerating the digitization of the whole application process will be ready in the next four to six months, while the Ministerial Council decided four months ago to have different treatment for professionals over a specific salary amount to come without any special application process, covering not only the digital professions but also life sciences, innovators and startups. He added that startup and digital nomads’ visas have been also simplified.

On the talent dimension, Kokkinos said that at the moment there are two different ecosystems in Cyprus.

“For example, there are about 11,000 Cypriot IT professionals and another 14,000 from other countries, making talent import larger than the local one. These two ecosystems work separately and we want to encourage their interaction, we are making interventions for upskilling and reskilling our workforce to serve the industry. We have done a lot on this aspect and will soon see a programme where the government will subsidize the upskilling and reskilling up to a certain certification level in close collaboration with interested companies”, he concluded.