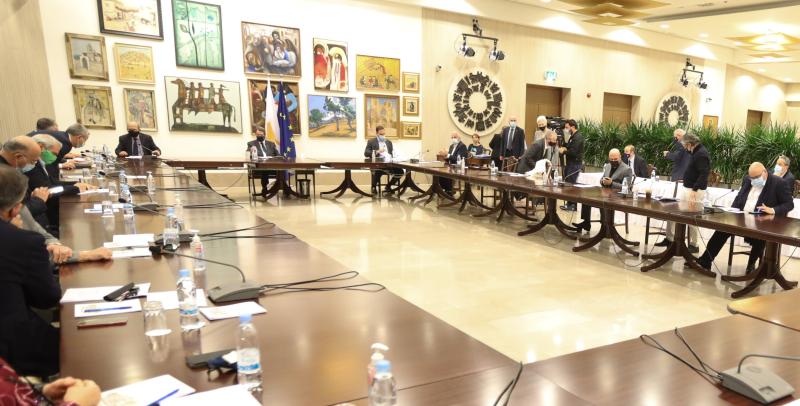 Cyprus` epidemiological outlook and the prospects for relaxing restrictive measures in place to contain the spread of COVID-19 were discussed during a meeting on Wednesday, chaired by Cyprus President, Nicos Anastasiades, with the participation of the political party leaders, Minister of Health Constantinos Ioannou and the members of the epidemiological advisory team on COVID-19.

In statements after the meeting, Government Spokesperson, Kyriacos Koushos, said that March will be a critical month and stressed that everyone should behave responsibly with a view to be able to completely ease the measures without any risk for the health of the people. Moreover he made clear that there is no political decision for taking specific measures for Limassol district where an increase of confirmed COVID-19 cases has been observed.

He also noted that President Anastasiades informed the political party leaders that the Council of Ministers will discuss on Thursday about further relaxations of the measures. Koushos said that the decisions taken will be announced by Minister Ioannou after the cabinet`s meeting.

Koushos noted that during today`s meeting, President Anastasiades briefed the political party leaders in detail and thoroughly about issues concerning the pandemic.

Moreover he noted that Health Minister, Constantinos Ioannou, and the coordinator of the epidemiological advisory team Constantinos Tsioutis, briefed the political party leaders on issues concerning the epidemiological outlook, the programme for the COVID-19 tests, the vaccination programme, the rate of vaccinations and the time needed so that all the population of Cyprus is vaccinated as well as about the measures that are being discussed and the relaxations which are expected to be decided on Thursday by the Council of Ministers.

The Government Spokesperson said that all political party leaders asked many questions, which were thoroughly answered by the President, the Health Minister and the members of the epidemiological advisory team.

Koushos urged citizens to be patient, noting that Cyprus has managed to be one of the countries with the best management of the pandemic.