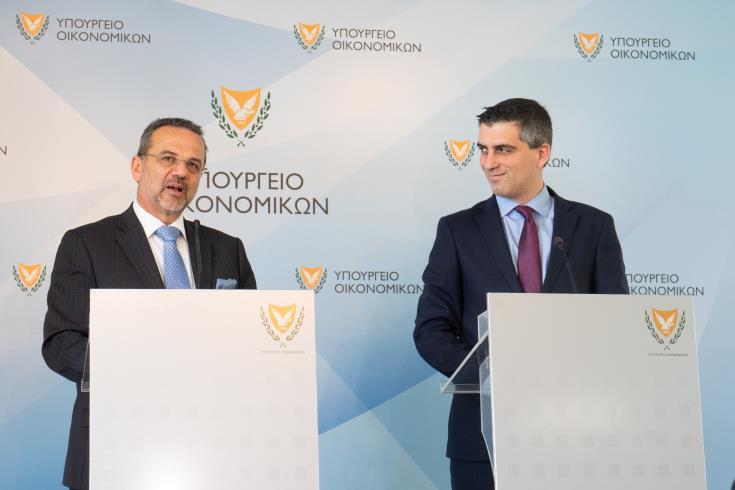 Greek Deputy Minister for Research and Innovation, Christos Dimas, and Cyprus` Deputy Minister of Research, Innovation and Digital Policy, Kyriakos Kokkinos, signed on Tuesday a Joint Declaration of Intent for cooperation in a future joint transnational program on research and innovation. The Joint Declaration was signed in the presence of the Greek Minister of Development and Investment, Adonis Georgiades.

As mentioned, the transnational cooperation program will have as indicative priority areas the development of smart cities, public health, renewable energy and support for the objectives of the EU Green Deal, digital transformation, as well as sustainable agriculture and agri-food.

The program will be funded by Greece and Cyprus and will be addressed to research, academic institutions and businesses in both countries, following the 2+2 model, with the participation in each project of one research/academic institution and one business from each country. In order to inform stakeholders and to launch the project, a joint open Call for Proposals will be published simultaneously in both countries within the next year.

Deputy Minister of Research, Innovation and Digital Policy of Cyprus, Kyriakos Kokkinos, stated that "the deepening of cooperation between Greece, Cyprus –and more broadly at the regional and international level– is the solid foundation on which we can build our common vision: a development model with research, innovation and technological development as its core drivers, bringing maximum benefits to the productive economy of both countries. Today we are laying the foundations for an expanded cooperation, which I am confident will be embraced and fully deployed by the research and business community," he concluded.

On his part, Greek Deputy Minister, Christos Dimas, noted that today`s signing of the Joint Declaration of Intent expresses the will for "closer cooperation between Greece and Cyprus in the fields of research and innovation. The Joint Declaration of Intent forms a wider network of cooperation in research and innovation for the benefit of the economy and society of both countries in critical cutting-edge areas," he added.

Greek Development Minister, Adonis Georgiades, said he was "particularly pleased with the signing of today`s agreement", expressing his confidence that notable results will be achieved in the coming period.