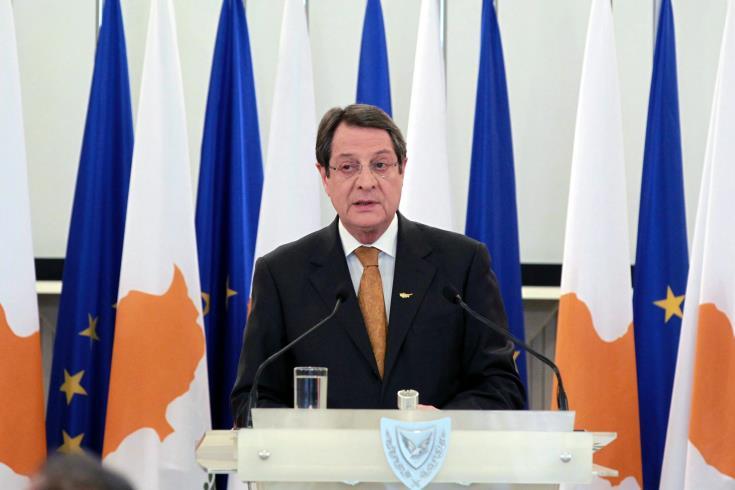 Cyprus President, Nicos Anastasiades, announced on Wednesday, during a televised address a new set of measures with a view to support businesses and the self-employed hit from the coronavirus pandemic, by utilizing new tools for granting cheap loans of more than 1.7 billion euros.

Following a meeting of the Council of Ministers, Anastasiades said that the government decided to provide liquidity amounting to 800 million euros to finance Small and Medium Enterprises (SMEs), through the Cyprus Entrepreneurship Fund, noting that the new set of approved measures aims to support the real economy of the country, “utilizing fully the tools provided by the EU and the European institutions.”

Anastasiades said that beneficiaries will be SMEs that have a number of employees that does not exceed 250 people per business.

He further noted that in order to grant loans to the Cypriot SMEs and to mid-cap companies, the government decided, in cooperation with the European Investment Bank, to increase the loan scheme by 500 million Euros.

Beneficiaries will be enterprises registered and operating in Cyprus which employ up to 3000 employees per business.

Moreover, the Council of Ministers approved the participation of the Republic of Cyprus to the Pan-European Guarantee Fund that has been set up with a view to address the repercussions of the COVID-19 pandemic at the EU member states.

Anastasiades said that Cyprus is expected to draw 300-400 million euros from this fund for the needs of the Cypriot economy.

Beneficiaries will be SMEs and mid-cap companies that have been hit by the pandemic.

The granted loans will be guaranteed by 80% by the Pan-European Guarantee Fund.

The President said that all loan schemes provide for the protection of jobs.

The government also decided for an interest rate subsidy scheme for new business loans to enterprises, including the self-employed, which lack liquidity due to the pandemic. This concerns loans that were granted or will be granted from March 1st 2020 until December 31st 2020.

Moreover, according to Anastasiades, the Council of Ministers decided to subsidize the interest rate for a particular period of time and with a fixed maximum loan with a view to support owner-occupied housing.

This concerns loans that were granted or will be granted from March 1st 2020 until December 31st 2020 and will not exceed 300 thousand euros.

The duration of the subsidy will be four years and will be up to 1.5 percentage point of the interest rate.

The government also decided to implement a scheme to subsides very small and small enterprises as well as the self-employed.

The President said that the aim of the scheme is to cover part of the rent and the operational expenses. The total amount of the subsidy is over 100 million euros.

The grants concern 50,000 very small and small enterprises as well as self-employed which employ up to 50 people.

According to Anastasiades, the amount of the grant will be allocated as follows:  self-employed and very small enterprises that have party or fully suspended their operation, have been participating in the Special Schemes of the Labour Ministry for the period from April 13 – May 12 2020 and were employing up to one person: 1250 euros, from 2 to 5 persons: 3000 euros, from 6 to 9 persons: 4000 euros and from 10 to 50 persons: 6000 euros.

The President also said that with a view to boost recovery, the Council of Ministers decided to give instructions to all the competent authorities with a view to immediately call for tenders for all development projects based on the President’s announcements or other projects which are mature, irrelevant from the planned period for the tenders according to the budget.

Therefore, Anastasiades noted the implementation of development projects is being expedited. As he noted the project which concerns the building of the House of Representatives if being excluded for the time being.

The President also said that the government decided a scheme of incentives up to 6,3 million euros with a view to boost the tourist sector and Cyprus’ connectivity. He noted that along with the current scheme the amount reaches 15.7 million euros that will be allocated until the end of 2020.

Moreover, with a view to reinforce the tourist accommodations and restaurants they decided to reduce VAT from 9% to 5% for the period from July 1st 2020 until January 10th 2021.

In addition, Anastasiades said, an amount of 22 million euros will be allocated to support and boost the agricultural sector as has already been said by the Agriculture Minister.

The President said that the total amount of grants with a view to safeguard jobs, partly cover the operational expenses and rents of the self-employed and the businesses, is up to or will exceed 430 million euros.

At the same time, he noted, boosting liquidity gives the potential to draw loans amounting to 1.7 billion euros, without taking into consideration the subsidizing of interest rates by the state for business and house loans.

The President stressed that the government proves once again, with the decisions taken today, its determination to support the dynamic restart of the Cypriot economy.

“I want to assure you that we will take any other measures considered as necessary, with the same determination, within of course the framework of the state’s economic potentials,” he noted.

Details about the measures adopted will be given by Finance Minister Constantinos Petrides during a press conference that will be held on Thursday.