The closure of Cyprus Airways will cost tens of millions of Euros to the Cypriot taxpayers, after the European Commission’s decision that the aid received in the past few years is illegal.

Taxpayers are not expected to recover the €66 million that the company was asked to return for illegal payments in the past two years, nor the €97 million given in 2007 so that the company would get back on track.

The bill from the company's operation is already big and the Finance Ministry is convinced that it would become bigger if the company did not close.

Since 2004, when the market was liberalized, the company has accumulated losses of €194 million. It failed to reduce its expenses at the same rate that it lost revenues. 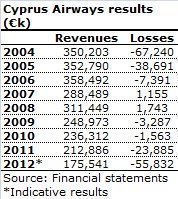 Although the public company did not issue accounts for 2013 or 2014, the Finance Ministry estimates that it has very few assets to repay the aid received. During the last years it has sold planes, buildings, some of its subsidiaries and significant slots in order be kept alive.

The last transaction was the sale of the logo to the government against €1.2 million.

The cost of the “padlock”

Due to the large losses the company was recording over time, the Ministry estimates that the closure of the national carrier will not cost more than if it continued to operate.

A significant burden for taxpayers is the loan received from the Hellenic Bank with a state guarantee. The loan has been reduced to €18 million.

There is also the cost of compensation of ticketholders. The Finance Minister believes that it will not exceed the compensation that CAIR would receive in 2014 due to the Turkish embargo, some €3 million annually.

The government has also undertaken to cover the deficit of the provident fund for the employees -except the pilots - which amounted to €14 million.

Part of it was covered by the sale of the Heathrow time slot.

The pilots had their own provident fund.

The company has cash in banks that are part of the revenues o €27 million from the sale of the time slot last June.

It also owes another €2 million to other creditors.

According to the Finance Ministry, the assets of CAIR are just a plane and 25% of the shares of Swissport.

The remaining five aircrafts have already been taken by the owner companies.

Compensations to the staff

The trade unions estimate that the cost of redundancy could reach €25 million.

The maximum amount corresponding to each employee and shall be paid as compensation, is estimated at around €48 thousand.

CAIR employed 560 people 62of which were pilots, 130 flight attendants, 67 employees in the catering department, 75 engineers and 226 people working in the administration, in the accounting department, in ticketing and other clerical services.
Previous
Next 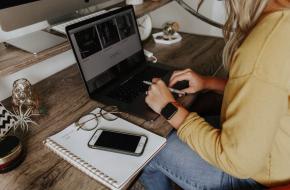