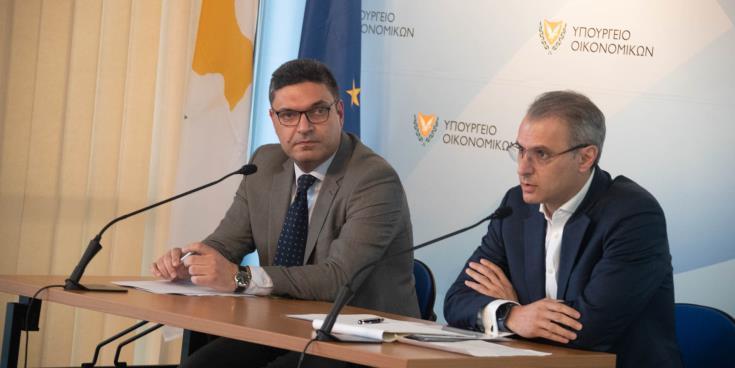 The government has unveiled two schemes to help workers keep their jobs and businesses to avoid bankruptcy amid the coronavirus pandemic.

The two schemes were approved by the Cabinet on Thursday and were presented by Finance Minister Constantinos Petrides.

He said the first provides for a suspension of loan payments for a period of nine months, or end of December 2020. The second provides government guarantees of up to two billion euros to banks to offer low-interest loans and to subsidize part of the interest rate.

Central Bank Governor, Constantinos Herodotou said that the two schemes protect the banks and urged them to proceed with measures that will be presented to the Central Bank which he added, is planning further measures.

The Minister of Finance said that in front of huge economic challenges there’s need of bold financial measures that will have a huge impact on public finances, will prevent a deep and prolonged crisis and will allow a faster recovery.

After the Government’s consultation with the political parties, the two schemes are expected to be approved Friday by the parliament.

The Minister also said that the Ministry of Finance, had been working in full coordination and cooperation with the Central Bank of Cyprus (CBC) to combine, in the best possible way, both monetary and fiscal tools.

Regarding the suspension of loan payments for a period of nine months, he said that the suspension covers businesses, natural persons and self-employed who were consistent with their obligations to both the banks and other credit institutions. For the implementation of the measure, a written request should be made to the financial institution.

On the other hand, the Minister said that Banks, while they will have costs due to the suspension of payments, they are not expected to face sustainability problems due to the flexibility provided by decisions of the Central Bank of Cyprus (CBC) and the competent European monetary authorities.

Regarding the second scheme that provides government guarantees of up to two billion euros to banks, he said that €1,750,000,000 will be granted as new low-interest loans to Businesses and self – employed and € 250,000,000 will be for subsidizing part of the interest rate to individuals, self-employed and businesses.

He explained that government guarantees would cover 70% of the losses that could result from the above loans and banks the remaining 30%, regardless of whether the loan was secured or not.
Loans will last from 3 months to 6 years excluding current accounts with a maximum guarantee of 1 year.

The process of granting government guarantees to credit institutions will begin in early April and it is expected that the first loans will be granted in early May 2020.


There are also conditions for granting government guarantees to credit institutions as well as for the granting of loans, such as the maximum amount of loans that may be granted and the reasons of the loan.

The Minister particularly noted the condition that eligible businesses and self-employed will not proceed with any layoffs from the date of the decree and until December 31, 2020 through the redundancy fund.

On his part the Central Bank Governor said that the suspension of loan payments helps the real economy, households and businesses, while safeguarding banks, which will not be forced to recognize as non - performing loans the difficulties that people are experiencing. He also urged banks to fully plan measures and present them to CBC. He added that the CBC was considering further measures to be announced soon.