13/10/2009 06:43
The banks decided to turn to the housing loans in order to reverse the downward trend in the lending market. In anticipation of the cheap liquidity that will be injected in the market from the issue of the special bonds, the banks have declared a war in the past few weeks via the offer of new lending products addressed to the households mostly.

The promotion of the bill for the special bonds urged the banks to launch a number of new housing loans, taking advantage of the favourable terms with which the banks will absorb new money from the European Central Bank.

To boost the credit market and to attract new customers, the banks offer a stable rate for only a few years as a teaser, with which the interest rate is readjusted to euribor plus the margin. The margin differs across the banks between 2% and 2.4%, depending on the other parameters of the loan. 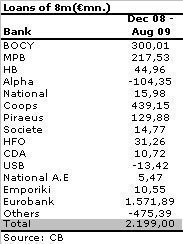 The banks also offer longer period of payment off that in certain cases might reach 40 years.

The Cooperatives observe the developments with great interest but avoid an involvement in this new war. Instead of low-rated loans in euribor, they offer rates with an interest rate of around 6%.

However, despite the banks’ efforts, the credit expansion is still very low, reflecting the hesitation on behalf of the households and the businesses to burden their balance sheets with additional debts. Since early 2009, the loan portfolios hardly grew by 4% or €2.2 billion.

This increase is mostly attributable to the interests charged on older loans.
Previous
Next