Business ties with Slovenia to grow 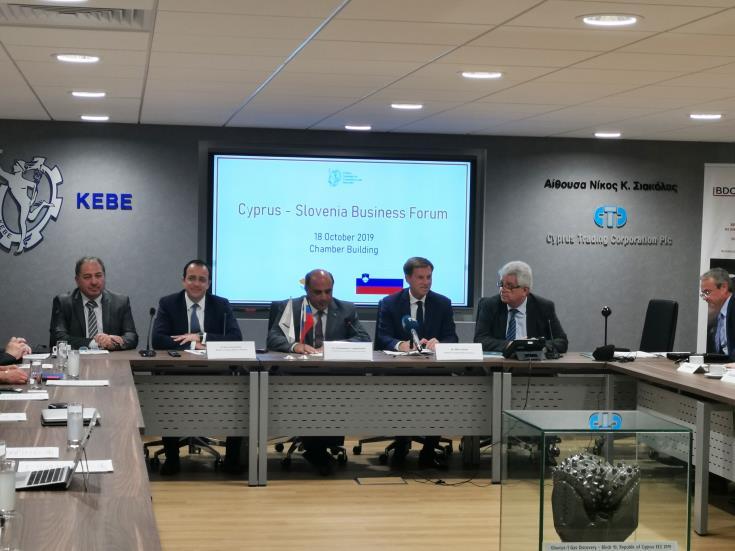 A Cyprus – Slovenia business forum organized today in Nicosia with the participation of firms from both countries sought ways to further enhance business cooperation and explored investment opportunities they offer.

The Forum was organized by the Cyprus Chamber of Commerce and Industry (KEBE) and the Embassy of Slovenia in Athens, as part of a two-day working visit the Slovenian Minister of Foreign Affairs Miro Cerar is paying to Cyprus. Cerar addressed the forum along with his Cypriot counterpart Nicos Christodoulides.

In his address, the Slovenian Minister noted that his visit confirmed the traditionally good and friendly relations between the two countries and stressed that the purpose of the visit was to enhance economic cooperation between Slovenia and Cyprus and to strengthen their mutual relations.

Cerar said, Cyprus ranks 12th among the leading countries investing in Slovenia. He said that by the end of 2018 Cypriot investments in Slovenia increased by 17% compared to 2017. However Slovenian investments in Cyprus decreased by 15% during the last year attaining little more than 26 million euro.

He also noted that trade in services surpasses trade in goods. “Last year trading services amounted to more than 44 million euros representing a 14% increase. Exports in Slovenian services is predominating and has increased by almost a quarter in comparison to 2017, attaining slightly more than 35 million euro. The main areas of both imports and exports are telecommunication, IT, and other business services and transport” he said.

“The trade in goods is on the increase. In 2018 total trade between Slovenia and Cyprus increased by 3% totaling more than 40 million euro, however it is worrying that Slovenian exports to Cyprus were almost halved while imports from Cyprus quadrupled. This shows that the trust of the Slovenian market in products from Cyprus is growing. In 2019 the trend remains unchanged”, he noted.

Moreover, Cerar noted that the two countries have a very prominent geostrategic position and that they are among the fastest growing economies in the EU. “We are two like – minded business countries and partners. It is essential for the governments of both countries to continue creating a positive climate and to adopt necessary legislation for promoting bilateral economic cooperation especially investments”.

The Slovenian Minister said that business was “a field with untapped potential” and that Cyprus and Slovenia should focus on increasing trading goods and services, tourist flows and service activities.

Slovenia, he said, is prominent in added value industry, digitalization, the food industry, logistics and services in general and also in supplying drinking water.

“The accompanying delegation reaffirms my belief that there is genuine interest in strengthening the Slovenian presence in the Cypriot market”, with ship building, logistics, freight forwarding among the main interests of the business delegation, as he noted.

“Slovenian companies have targeted known and potential business partners in Cyprus and are meeting with them today”, the Minister said.

He also pointed out that both Slovenia and Cyprus are maritime countries with important ports, with Koper port being one of the best entry points to the Central and Eastern Europe and the Limassol port being the biggest in Cyprus and one of the most important ports in the Eastern Mediterranean.

The Cypriot Minister of Foreign Affairs Nicos Christodoulides noted that “part of the equation that makes political ties stronger, and we really want to increase and enhance our political ties, is the existence of strong economic and trade relations”.

The Minister said that the core objective of the business forum was the creation of opportunities for business people and investors from Cyprus and Slovenia to explore means and ways of economic cooperation.

“The aim today is to shed light on the unique investment opportunities that Cyprus and Slovenia have to offer, to exchange ideas, to establish contacts and channels of communication and to form cooperation that will enable us to achieve a strategic reorientation of our economic partnership”, he stressed.

Moreover, he pointed out that the Government of Cyprus will continue to stand by the local and foreign business community always striving to create a business-friendly economic environment.

“Today’s forum aims at the further promotion of financial and business cooperation between Slovenia and Cyprus”, KEBE Chairman Christodoulos Angastiniotis noted in his remarks.

“Cooperation potentials between the two countries are vast, particularly in the fields of investments, tourism and commerce”, he said.

According to Angastiniotis, Slovenia may benefit from the various competitive advantages of Cyprus in its efforts to expand its investment opportunities to the Eastern Mediterranean, whereas Cyprus has always endeavored to expand its business operations in the greater Balkan region and Slovenia could act as its gate to the Balkans.

“Slovenia may offer new opportunities to Cypriot companies”, he said.