Home » News » Cyprus and the Netherlands sign a tax agreement 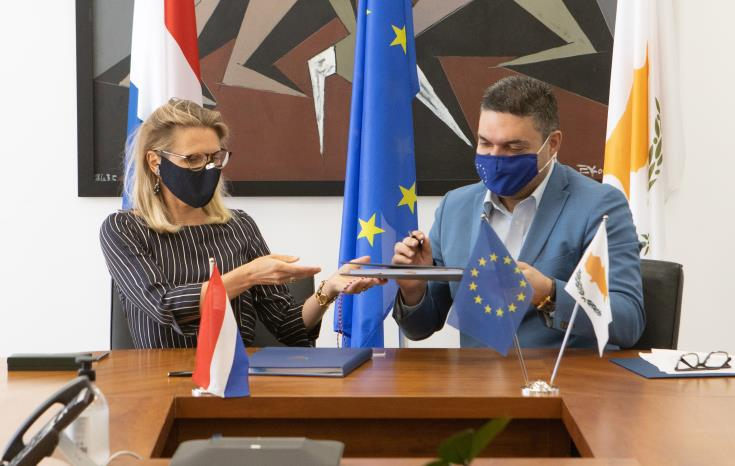 The Republic of Cyprus and the Kingdom of the Netherlands signed on Tuesday in Nicosia the Convention for the Elimination of Double Taxation with respect to Taxes on Income and the Prevention of Tax Evasion and Avoidance.

Speaking after the signing, Petrides said that the Agreement will ensure the tax handling of transactions between the two countries, providing stability and certainty to investors. At the same time, he expressed confidence that the agreement will contribute to the further development of economic and trade relations between the two countries, as well as in strengthening and promoting investments between Cyprus and the Netherlands.

The Ambassador said that this important step underlines the excellent bilateral relations between the two countries and the will, as she pointed out, is for both countries to cooperate even closer on such an important topic.

“I certainly believe that it will strengthen our economic and trade relationship and will provide a stimulus for the promotion of mutual investments and enhance our work on tax matters”, she said and thanked all those involved for the successful and persistent efforts in negotiating this text that will serve as a solid base for all those, otherwise subject to double taxation, and for the two governments as a strong tool to prevent tax evasion and avoidance.

She pointed out that the agreement also provides certainty to companies, organizations and individuals on the fiscal treatment of their income and the capital gains. “It is a good thing that the latest international standards are reflected to this Treaty”, she added.

She finally said that it was a pleasure for signing this Treaty during her 10 year in Cyprus as an Ambassador of the Kingdom of the Netherlands and to contribute to the expanding and upgrading our networks on double taxation.

The Convention is based on the OECD Model Convention for the Elimination of Double Taxation on Income and on Capital and incorporates all the minimum standards of the Base Erosion Profit Shifting (BEPS) project, as issued by the OECD /G20. Furthermore it includes the exchange of financial and other information in accordance with the relevant Article of the Model Convention.

Expanding and upgrading the network of the Double Taxation Conventions, is of high economic and political importance of the Government and aims to further strengthen and promote Cyprus as an international business center, the Ministry says.