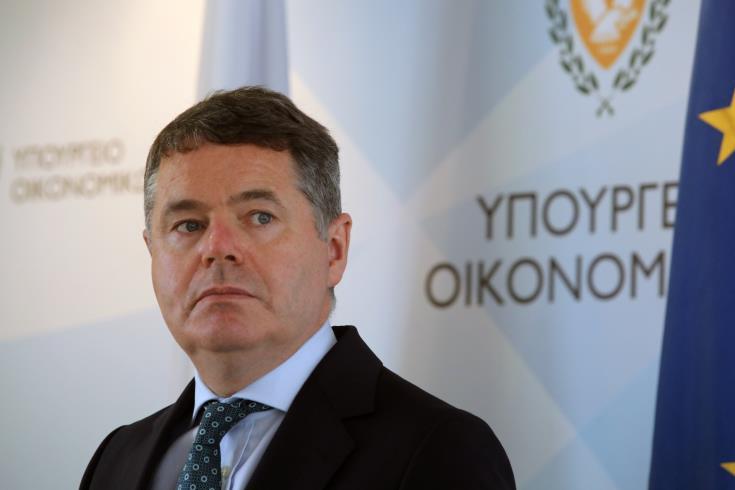 The Eurozone members will continue to run fiscal deficits in 2021 and next year as “we are not finished” with the Covid pandemic, Eurogroup chief and Ireland’s Finance Minister Pascal Donohoe has said, noting that after summer a discussion will be held on a European level concerning the return of fiscal rules.

In an interview with CNA on the occasion of his visit to Cyprus, Donohoe said he is not worried over the increase of general government debt in the Eurozone due to the Covid support measures, noting that due to ECB monetary decisions and action taken by government concerning debt management the increased debt levels will be manageable as the countries will begin reducing deficits once the health situation improves.

Furthermore, he once more praised Cyprus strong performance following the 2020 downturn due to decisions by Cypriot authorities.

Recalling the EU Commission’s projections over a 4.3% growth rate this year and just below 4% in 2022, Donohe added “my view is the Cyprus economy is performing very strongly given the scale of challenges that it faced and I believe your government has done a very good job with the Recovery and Resilience Plan that I think will further assist the ability of the economy to recover.”

Asked what his suggestions to Cyprus would be as the island is debating a long -term strategy on its future growth model, Donohe recalled his country’s financial crisis a decade ago and pointed out that growth should not be depended on a single sector while capital investments should be planned yearly in sectors such as transport and education. “Investment does not pay off always immediately, it creates the foundations for growth in the future,” he said.

Deficits until 2022, investments on climate and digitization

Responding to a question on the priorities for safeguarding economic recovery in the post-covid era, Donohoe said the pandemic is not over yet “and the vital first step for getting ready for the moment at which this disease is still in circulation but is no longer a pandemic, is to continue with our efforts to protect each other while the disease is still so infectious.”

“We are going to spend more and invest more in helping us get to a low carbon future and then a no carbon future at the right point and, secondly, will be about what our digital future will look like,” the Irish Finance Minister said, adding transition to lower carbon and digitisation entails “huge opportunities.”

Asked whether is time for the EU to reconsider the Stability and Growth Pact, which many financial experts describe as complex and difficult to implement effectively, Donohe replied the Commission decision to invoke the Pact’s escape clause amidst the pandemic was “sensible and important” as it provided governments with the flexibility so that governments would respond to the effects of the pandemic.

“And then after the summer we will be having a debate regarding the future of the fiscal rules that would take some time,” he added.

Donohoe acknowledged the number of people who understand terms such as the output gap “is smaller than we think,” but he stressed that complexity in the rules creates flexibility.

“The challenge we will face is the simpler rules become, the less flexibility there is in them,” he said.

The Irish Finance Minister also pointed out that due to the fiscal rules many countries were running very low deficits or were balanced or indeed had surpluses when the pandemic struck.

“God knows where we would be now trying to deal with a pandemic if we had all gone in to this crisis with deficits,” he added.

Asked over fears for a new sovereign debt crisis due to the coronavirus pandemic, Donohe said he does not share such fears, pointing out to the ECB’s monetary decisions, which brought down sovereign bond yields.

“While the debt levels are higher, I believe that if we carefully reduce our deficits as the public health emergency improves, I believe we can manage the higher levels of sovereign debt that we have,” he said.

Concluding Donohe noted that “we should look to the future with caution but also with hope and I believe we can beat the pandemic, get our economies growing and get people back to work in Europe and in Cyprus and in Ireland and avoid some of the terrible difficulties that we had a decade ago.”