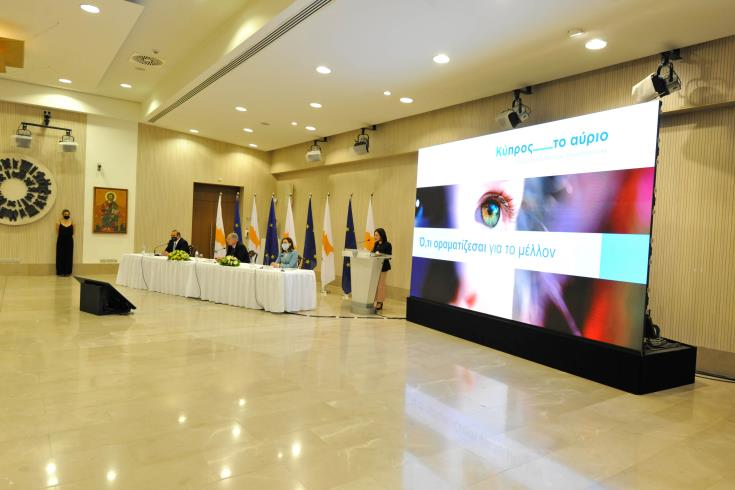 More than 1 billion Euros will be allocated in Cyprus during the next five years for a speedy transition to a Green Economy.

Ministers of Agriculture, Rural Development and Environment, Costas Kadis, Energy, Commerce and Industry, Natasa Pilides and Transport, Communications and Works, Yiannis Karousos, presented on Monday, during a press conference, the policies, reforms and projects included in the National Recovery and Resilience Plan that are related to the speedy transition to a Green Economy.

The pillars on which this transition focuses are climate and the environment, termination of Cyprus’ energy isolation and the opening of the energy market, electromobility and sustainable mobility, upgrading energy performance and renewable energy sources, sustainable management of water resources and circular economy and waste management.
The National Recovery and Resilience Plan’s second pillar which concerns the promotion of Green Economy has a budget of 448.3 million Euros. It aims at contributing to green transition and environmental sustainability through the achievement of the national goals for climate neutrality, energy efficiency and renewable energy sources.

The third pillar, that concerns the reinforcement of the economy`s resilience and competitiveness, also contributes to the speedy transition to the Green Economy with actions amounting to 64.3 million Euros, that aim at achieving the goals of a circular economy.

Forty-one per cent of the 1.23 billion euros investments of the Recovery and Resilience Plan, that is 512 million Euros, have to do with the green transition. Kadis said that this highlights the aim of the government to achieve a greener economy and a more sustainable environment.

Apart from the Recovery and Resilience Plan other European funds and funding mechanisms as the THALIA 2021-2027 Cohesion Policy Programme, the 2021-2027 Agricultural Development Programme and the Just Transition Fund contribute to the green transition.  The total additional contribution is 750 million Euros.

Presenting the projects and policies of her Ministry, Pilides said that the Ministry has to manage, during the period 2021-2027, co-financed funds amounting to 547 million Euros, which come from the Recovery and Resilience Fund (337 million), the European Structural and Investment Funds/Cohesion Fund (209 million Euros) and other Funds, out of which 61% concern the Green Economy.

She noted that these funds will be allocated in the form of incentives to attract investments aiming at making the country more sustainable and competitive, while there will also be investments in research and  infrastructure projects.

Minister Karousos said in his presentation that projects of up to 89.3 million euros are being promoted which are related, among others, to electromobility, the withdrawal of polluting vehicles and the development of infrastructure.

On his part, Minister Kadis said that the total budget of the Agriculture Minister as regards the Recovery and Resilience Plan is 200 million Euros and provides for the implementation of 19 measures, out of which 14 concern investment projects and five concern reforms.