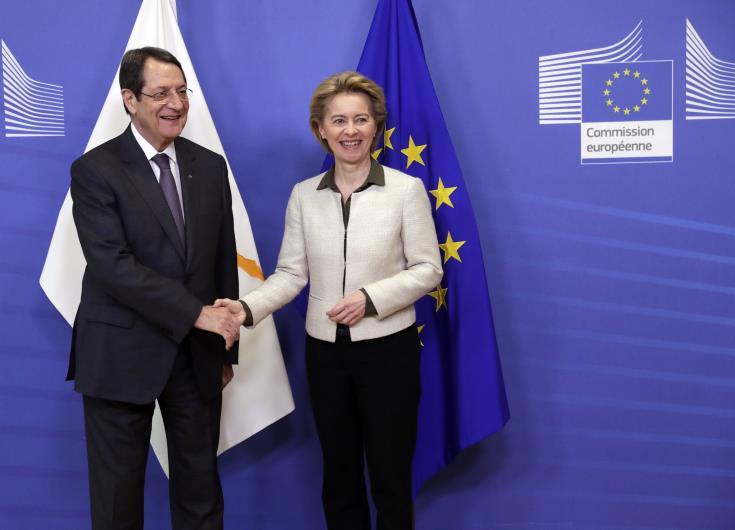 The Cyprus issue, Turkey`s illegal actions in the Exclusive Economic Zone of the Republic of Cyprus and within the Famagusta fenced off area, the EU`s next multiannual budget and the Commission`s halloumi dossier, were at the center of President Nicos Anastasiadis` meeting with President of the European Commission Ursula Von Der Leyen.

Government Spokesman Kyriakos Kousios, speaking to the Press on the sidelines of the extraordinary session of the European Council said during President Anastasiades' meeting on Thursday with the European Commission President , they discussed the Multiannual Financial Framework (MFF 2021-2027) with Anastasiades raising the position and concerns of the Republic of Cyprus regarding the funds to be allocated to the island.

Cohesion Policy, the Common Agricultural Policy (CAP) and Immigration, where further discussed with Von Der Leyen, explaining  that due to the high influx of refugees and asylum seekers in Cyprus, conditions require an increase of funds that Cyprus will receive from the European Union , he added.

Kousios noted that the President "also raised individual issues, such as the halloumi dossier, and Mrs Von Der Leyen responded positively to the demands of the Republic of Cyprus, while giving instructions to expedite the examination of the specific dossier".

In addition, President Anastasiades further briefed the President of the European Commission on developments in the Cyprus issue, Turkey`s illegal actions both in the EEZ of the Republic of Cyprus, and in the fenced off area of Famagusta, explaining that actions like these should be dealt with by the EU, and called for EU support in this regard, so that Turkey does not continue its actions  without sanctions, the Government Spokesman said.

"The goal is not to cut the funds, but for Turkey and some Turkish Cypriots to realize that actions like these entail repercussions,"  Kousios explained.

The Spokesman said Von Der Leyen expressed full understanding and assured there will be close cooperation on this issue with the Commission itself, while at the same time action will be taken on behalf of all EU Member States.

According to the Government Spokesman, earlier Thursday the President of the Republic also met with European People`s Party (EPP) President Donald Tusk where they discussed the Cyprus issue and Turkey`s unlawful actions both within the EEZ and in Famagusta. He thanked Tusk for the continued steadfast support of the EPP while Tusk assured him that the EPP will firmly support the positions of Cyprus. 31/03
Cyprus posts fiscal surplus of 0.9% of GDP
31/03
Revenue from tourism accelerates by 1.5% in January 2020
31/03
Dr Nikolaos Mastroyiannopoulos appointed new Chairman of RIF’s Board of Directors
31/03
Annual inflation down to 0.1%
31/03
Cabinet approves three draft bills for fines and prison overpopulation in relation to COVID-19