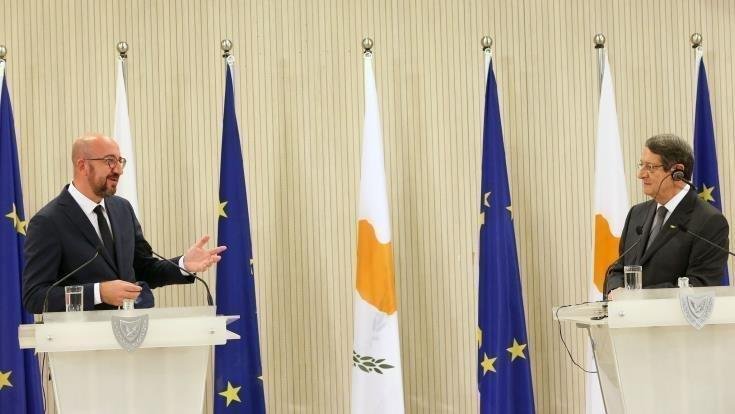 European Council President Charles Michel sent a clear and concrete message of solidarity to Cyprus, ahead of the Special European Council, on September 24-25, which will discuss EU-Turkey relations in light of the continuous provocations by Ankara in the Eastern Mediterranean.

Michel, who was in Athens yesterday for talks with the Greek Premier Kyriakos Mitsotakis, had a tete-a-tete meeting on Wednesday morning with Cyprus President Nicos Anastasiades, followed by consultations.

In statements to the press Michel said that solidarity must be showed by deeds and not only words, adding that Turkish challenges are not an issue that concerns only Cyprus and Greece. He also said that he has built a relationship of trust with President Anastasiades.

President Anastasiades in his statements  said that Michel’s visit is taking place at a particularly crucial time, as Turkeyescalates provocations, pointing out that Ankara renewed its illegal NAVTEX only yesterday.

He also said that Cyprus looks forward to the EU involvement and stressed that it is important to be united and determined.

He added that Michel’s presence in Cyprus today demonstrates in practice the European Union`s strong concern about the developments in the Eastern Mediterranean and the decisive involvement it wishes to have to resolve the issues,so that peace and security can prevail in region.

President Anastasiades sad that EUCO President briefed him on the discussions the EU has with Turkey and with EU leaders, adding that they both agreed that the European Union must make a decisive contribution for stability in the region, while remaining committed to respecting international law and the law of the sea.

"Respect for the sovereignty of all member states should remain a rule that no one can ignore," President Anastasiades said.

"I reiterated to President Michel that Cyprus stresses the need to remain focused on using all the means at our disposal, avoiding a double-standard approach. As long as there are illegal actions against member states, the reaction of the European Union should be immediate," he stressed.

He also said that he briefed President Michel on Turkey’s plans regarding the fenced-off town of Varosha and he thanked him for his initiatives,  in cooperation with the EU High Representative and the German EU Presidency.

“I reiterated that Nicosia is always ready for dialogue. But the dialogue in order to be effective, must be properly planned, on the basis of international law without any blackmail or threats," he said.

In his statements, Cyprus President said that he underlined the need for all of us to work for the resumption of UN talks for a comprehensive solution to the Cyprus problem, in accordance with the UNSC Resolutions and the EU acquis that will bring prosperity, peace, stability and security to all the people on the island.

The discussions also covered the issue of migration. The President said that Cyprus is faced with an unprecedented increase in migration influxes, mainly from Turkey.

He said that this unprecedented situation is a test for the resilience of Cyprus’ infrastructure, economy and demographic character. President Anastasiades said that the percentage of asylum seekers under international protection is 3.8% of the population in the Republic of Cyprus and spoke of an attempt by Turkey to change the demographic character, as it did in the occupied areas of the Republic.

President Anastasiades expressed the opinion that the European Union is being blackmailed by Turkey through the flows of refugees and migrants, with an instrumental approach. He also mentioned Turkey’s refusal to cooperate and fulfill its European obligations towards the Republic of Cyprus, including the Readmission Agreement.

"Overall, we agreed with the President (Michel) that a more effective approach to the migration issue for all front-line countries should be based on the principle of solidarity and a fair sharing of responsibilities and burdens," he said.

The President of the European Council, speaking through an interpreter, noted that he has developed a relationship of trust with President Anastasiades and referred to the EU solidarity towards Cyprus.

He spoke of worrying developments in the Eastern Mediterranean over the past month, stressing that this is why we do not want this issue to be passed on as an issue that concerns only Greece and Cyprus.

He said that in the EUCO meeting next week, a strategic dialogue will take place at the highest level on EU’s future actions including Turkey.

"I believe that we really need to be absolute in terms of respecting the rights of all the states of the European Union and of course the interests and rights of Cyprus. Of course, these interests are based on the principles of the Union", he said.

President Michel said that only through dialogue and having common goals can we make progress on de-escalation of the crisis, respecting international law.

He added that solidarity is displayed in actions and not only words adding that these actions should be done in an intelligent way in order to achieve the best results.

Referring to the issue of migration, Michel said it is a challenge for the EU and globally, pointing out that he visited the Geek island of Lesvos which faces very serious problems. He added that in a few days the EU will propose a Migration Pact and there should be a political dialogue between the Member States in order to be more effective and to support all states especially those in the frontline.

He also said that EU leaders must work hard "to send very clear messages in order to make progress".

The President of the European Council also referred to the efforts that will take place in the framework of the UN on the Cyprus problem adding that “the EU should also be more ready to commit and support your own efforts in order to make progress in this issue".

In his concluding statement Michel said that he wants to convey a clear and concrete message from Europe “that will allow us to show this solidarity not only through words, but also through actions that will have a positive impact in order to move in the right direction ".

Turkish drill ship “Yavuz” arrived last April in the ΕΕΖ of Cyprus, after Ankara announced another attempt to drill a well in blocks licensed to European companies. This is the 6th time Turkey attempts to drill within the EEZ and continental shelf of the Republic of Cyprus, this time in an area licensed to ENI and TOTAL.

Cyprus has been divided since the 1974 Turkish invasion. The latest UN backed round of talks took place in the Swiss resort of Crans Montana but failed to yield any results.