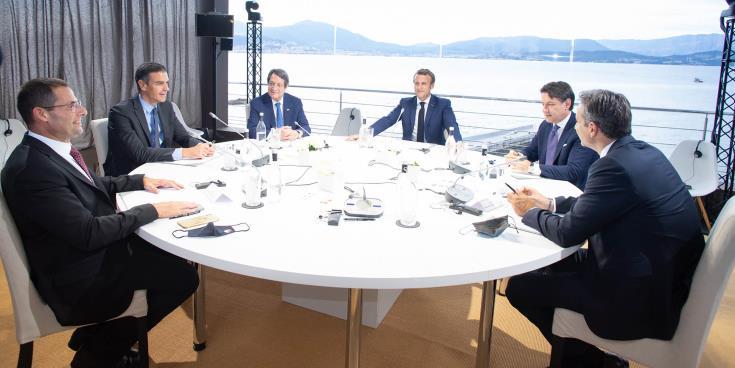 President of the Republic of Cyprus Nicos Anastasiades underlines to his counterparts the need for a decisive EU stance in relation to Turkey, Government Spokesman Kyriakos Koushos has said referring to the Summit of the EU Mediterranean countries MED7 that is hosted in Corsica, France.

"The # Med7 Summit in Corsica is under way. President @Anastasiadescy points out to his counterparts the need for a decisive EU stance that will have a cost, while clarifying that it is not possible for Turkey to continue to act unhindered in the region", the Spokesman says in his twitter account.

The leaders of the seven Mediterranean EU member states, who meet on Thursday in Corsica, will discuss, inter alia, Turkish provocations in the Eastern Mediterranean and are expected to issue a Joint Declaration after their Summit.

The 7th MED7 Summit is attended by Cyprus President Nicos Anastasiades and the leaders of France, Italy, Spain, Portugal, Greece and Malta.