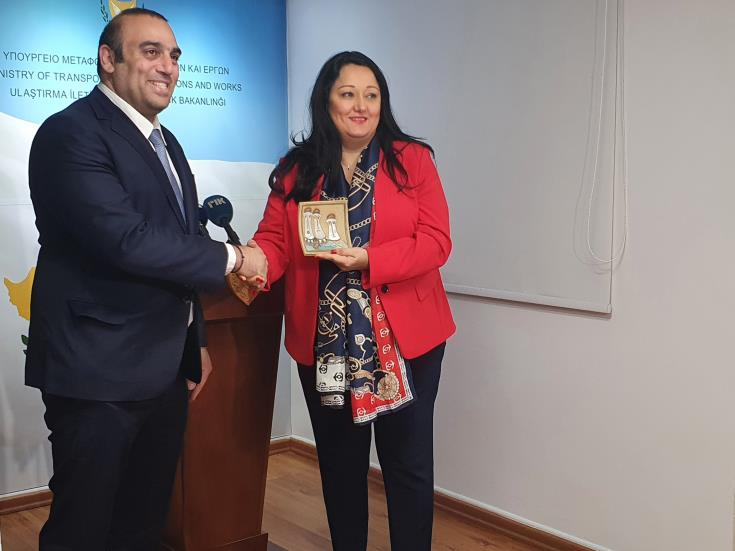 The further expansion of the Cyprus National Road Network, road safety and the financing of the new Archaelogical Museum and new State General Laboratory, are the three priorities that the European Investment Bank (EIB) is planning to discuss for the new year, said Lilyana Pavlova, Vice-President of the Bank, after meeting Cyprus Minister of Transport, Communications and Works, Yiannis Karoussos, on Friday.

In his statements, the Minister talked about the current collaboration the Ministry has with EIB, since just few months ago a new loan agreement for €112 million was signed. Through that, the financing of relevant projects was possible, such as new motorways and the speed cameras system.

Moreover, Karoussos said that he discussed with the Vice-President the further collaboration of the Ministry with the EIB. This would include “the new museum of Nicosia, which is the biggest project of the Ministry at the moment, with a budget of €120 million, various projects of road safety or even more motorways, that are currently under tender.

The Minister also informed Pavlova about sustainable urban mobility and the environment, since “it is known that a big part of the responsibility for the reduction of pollutants lies within the Ministry of Transport, as 50% of Cyprus pollution comes from transportation,” he said.

EIB’s Vice-President said that the Ministry of Transport is one of its main collaborators in Cyprus. She mentioned the projects that EIB financed last year, emphasising the National Road Network development.

Then, she added that there are three priorities for EIB in Cyprus for the new year. The first one, is to continue financing the road sector, with a special focus on road safety.

“Road safety is one of the very important elements for the financing we are providing,” she said.

She expressed her satisfaction for the implementation of the “long-awaited" investment in speed cameras.

The other two priorities that EIB is discussing for this year, according to Pavlova, concern the financing of the new National Museum, which she described as a “landmark” and “flagship project”, as well as the new State General Laboratory.

She wished success in the implementation of key infrastructure projects, because “they have extreme importance for the safety and the sustainable mobility of the country,” she concluded.