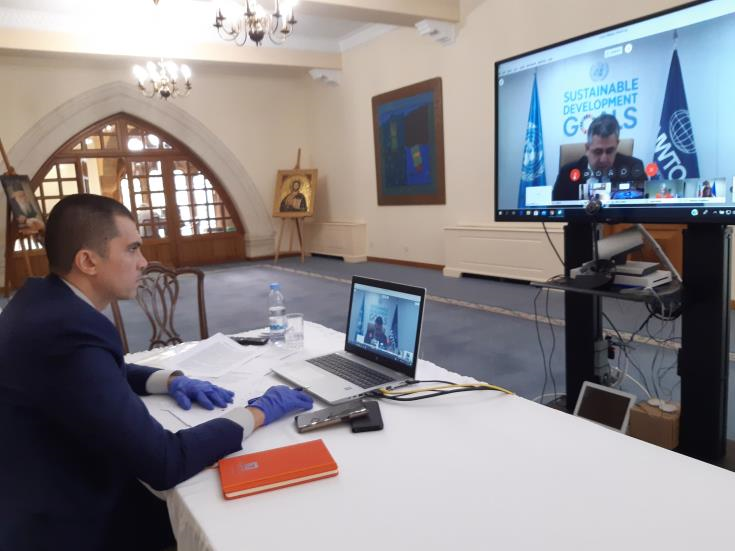 The need to adopt a common framework concerning the rapid antigen tests which are being conducted in the EU stressed Cyprus' Deputy Minister of Tourism, Savvas Perdios, while expressing in adopting a common approach regarding vaccination certificates, during an EU Tourism Ministers' videocall, held under the Portuguese Presidency of the EU Council.

The videocallll was aimed at "promoting a more effective pan-European approach to supporting the tourism industry, which has been hit hard by the coronavirus pandemic", as well as joint measures to boost tourism, cross-border mobility and the restoration of travelers` confidence. The Minister stressed that a common approach to vaccination certificates "will allow, on the one hand, vaccinated citizens to travel without laboratory tests, while not excluding those who have not been vaccinated to travel, who can do so by presenting a negative laboratory test for coronavirus."

The Ministry recalls that "on the highly important issue of the European Vaccination Certificate (Digital Green Pass), the EU Council committed, in the context of the teleconference, to present a concrete proposal on the issue within March".

In addition, the Deputy Minister of Tourism "presented the dramatic impact the coronavirus pandemic had on the tourism sector in Cyprus", by noting that "the decrease in tourist revenue and arrivals for the year 2020 reached 85%". "The numbers speak for themselves," he said, adding that "Cyprus is the member state whose tourism industry may have taken the biggest blow in the EU."

The Minister explained that the tourism industry in Cyprus is inextricably linked to the country`s air connectivity with the rest of the world, and suggested that the current state aid framework for the aviation industry is extended, both in terms of duration and height of the relevant state aid.

He also expressed the support of Cyprus in favor of a long-term European strategy for tourism, which will have as its main pillar sustainable tourism development, in line with the broader objectives of the Green Agreement.

Finally the Deputy Minister of Tourism had a second teleconference with the Commissioner for Internal Market Thierry Breton, during which he informed him about the implementation of the National Tourism Strategy 2030, as well as about the national plans of Cyprus, under the Recovery Instrument. The two officials also had the opportunity to exchange views on the ways in which the Commission supports the Cypriot tourism industry, as well as general issues related to their mandates.