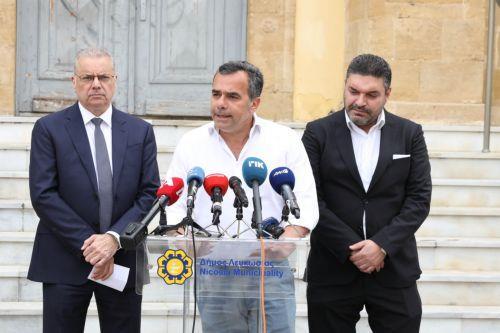 The launch of applications for the Grant Scheme for the conversion and creation of student residences and rooms under the Action Plan for the Revitalisation of the old city of Nicosia was announced on Monday at a joint press conference by the Mayor of Nicosia Constantinos Yiorkadjis, Minister of Interior Nicos Nouris and Minister of Finance Constantinos Petrides, in the presence of representatives of the Cyprus Scientific and Technical Chamber, the Planning Council and the Association of Friends of Nicosia.

According to the Ministry of Interior, the Project is included in the Cyprus Recovery and Resilience Plan for the period 2021 - 2026 and will have as its main source of funding the European Union's Recovery and Resilience Mechanism, the central instrument of NextGenerationEU. The Department of Town Planning and Housing is responsible for the management and implementation of the Plan, while the total budget allocated for grants during the implementation period of the Plan amounts to €15 million, with applications to be submitted from 2 May until 1 November 2022.

Speaking at the Plan's announcement, the Mayor of Nicosia said that never before so much has been done in the old city, and wherever there have been integrated interventions, the results have been positive.

"We realise that there is still a lot to be done. This project aims to bring us one step closer to the permanent and qualitative revitalisation of the walled city," he added.

For his part, the Interior Minister said that the plan to create student residences in the walled city of Nicosia is accompanied by a number of other actions which are already in motion and will be implemented in the coming weeks.

"At the same time as the students’ residence project, a business plan will be launched which aims to give support to entrepreneurs who want to invest," said Nouris, adding that in recognition of the city's need for additional housing units, "the Ministry of Interior has decided to extend the implementation of the housing plan which we are implementing in the countryside areas and the old city to give this possibility as well”.

In addition, the Interior Minister referred to a new plan of urban planning and financial incentives, which will be implemented starting next month and will be available to those who choose to invest in the walled city of Nicosia.

The Finance Minister stressed in his remarks that Nicosia is and should be a young city where cultural activities coexist with academia and students, adding that "old Nicosia, the only divided capital in Europe, could not be left out of this effort."

"The government has a proven track record of providing support where there is a need and we believe that in a very few years what started as a vision and translated into policies will become a reality for a city that will be the envy of many," he added.

Asked by reporters whether the government shares the residents' concerns about the ghettoisation of old Nicosia, Nouris replied that although the situation is clearly worrying, "there is no better answer than today's announcement because the fact that all of a sudden a holistic intervention is being made to revitalise buildings that are currently considered either ageing or unsuitable for human habitation. I believe that it is a very good step towards de-ghettoising Nicosia and reintegrating people who consciously chose, because of the problems that existed, to distance themselves from the old city, while the regeneration will also be a step forward for the better management of migration."

The Mayor of Nicosia commented that "the aim is to expand the number of interventions to bring progress and revitalisation", while on security issues he added that the walled city has its own police station at the Ledra checkpoint and in recent years the number of daily patrols has increased significantly.

Finally, the Finance Minister said that in Nicosia there was indeed this danger "first of all because of the Green Line, because of the large number of Turkish Cypriot properties that were abandoned, but also because of the migration issue, so a holistic revitalisation plan would be for the benefit of the migrants themselves, but it would also give a sense of security to the local population".