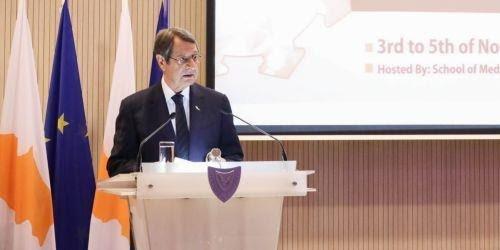 Addressing a gala dinner at the Presidential Palace on the occasion of the 10th anniversary of the International Multithematic Bio-Medical Congress "Biomedical Scientific Cyprus", President Anastasiades said that the fact that this conference takes place for the 10th consecutive year, "with the participation of renowned doctors and scientists from all over the World, manifests that it has been firmly established as an internationally reputable Congress in the field of Medical Science."

"And I have no doubt that during the interventions and discussions held today and which are to continue during the next two days, our medical community will receive insightful knowledge on medical and health related issues, such as, amongst others, on cancer, neurology, cardiology, diabetes and molecular medicine," he added.

President Anastasiades praised organiser European University of Cyprus for its "pursuit of academic and research excellence, with the annual Times Higher Education ranking it among the world’s top 201+ universities as regards policies and practices implemented in the fields of teaching, research, entrepreneurship and the transfer of knowledge to society."

He also said that "equally important is the fact that the University’s policies and actions actively compliment the Government’s efforts to establish Cyprus as a regional educational, research and excellence centre."

"And I am glad to attest that our efforts are bearing fruit if one considers that in 2013 only 8 thousand EU and third-country nationals had chosen Cyprus for studies, whilst now they are over 35 thousand," he noted.