Citizens' trust in institutions has declined 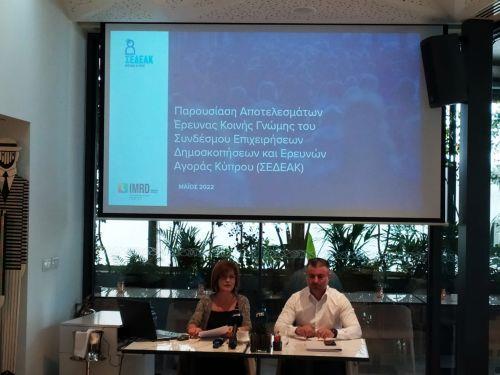 Citizens' trust in institutions has declined, according to the results of a poll on current issues, conducted by the Association of Polling Companies and Market Research of Cyprus (SEDEAK), on Tuesday, in Nicosia.

The first question of the poll examined the degree of optimism of the citizens for the future of Cyprus based on international developments.

The second question concerned the degree of citizens' satisfaction with the institutions. Respondents answered that they are more satisfied with the General Health System and the Auditor General (3.34 and 3.25 respectively), followed by public education (2.58), the Attorney General's Office (2.51), the Parliament (2.27), the state (2.26) and public transport (2.20).

Sixty percent ready for a woman President of the Republic

Asked if Cypriots are ready to accept a woman as President of the country, 60% replied in the affirmative, 38% in the negative and 2% "I do not know / I do not answer." The percentage of positive responses is higher in men compared to women (63% and 57% respectively).

Replying to the question "Why do you think some citizens do not turn out to vote in the elections?", the respondents cited the lack of trust in politicians as the first reason (55%). The second reason is that they do not believe that things will change whoever is elected (38%) and the third reason is indifference (29%). Other reasons are that there are no candidates to inspire (20%) and that citizens are dissatisfied with the candidates of the party that they support (11%).

In recent years, there has been a decline in people's trust in institutions, according to opinion polls, said Eleni Marangou, SEDEAK President, adding that their confidence in the Parliament, the state, the army and the Church has declined.