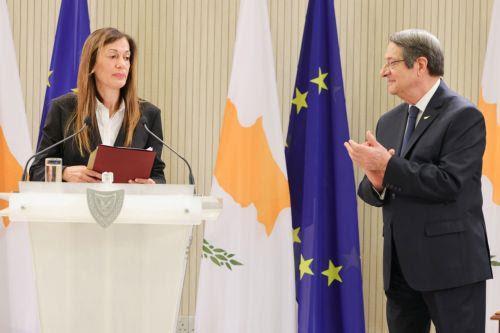 Stalo Chatziyianni was sworn in on Tuesday as Supreme Court Judge, after accepting her appointment by Cyprus President Nicos Anastasiades, pledging that she will work to resolve long-term issues that delay the administration of justice.

In an address during a ceremony at the Presidential Palace, President Anastasiades explained that Chatziyianni was appointed in the Supreme Court, due to her expertise and 26 years of experience as an officer of justice. He also expressed his conviction that she will conscientiously and objectively perform her duties.

The President spoke of the ongoing reformation of justice in Cyprus and referred to seven legislative and other measures the government has put forward that aim to make its operation faster and more effective. He reassured of his determination to implement the justice reform plan and invited Chatziyianni to contribute to this collective task, in order to tackle the sole reason for complaints about the justice administration, which, as he said, is the delay in judgments.

She said that justice that is not timely, is not justice at all, and concluded that in spite of the weaknesses of the system, a judge should always find a way around them.