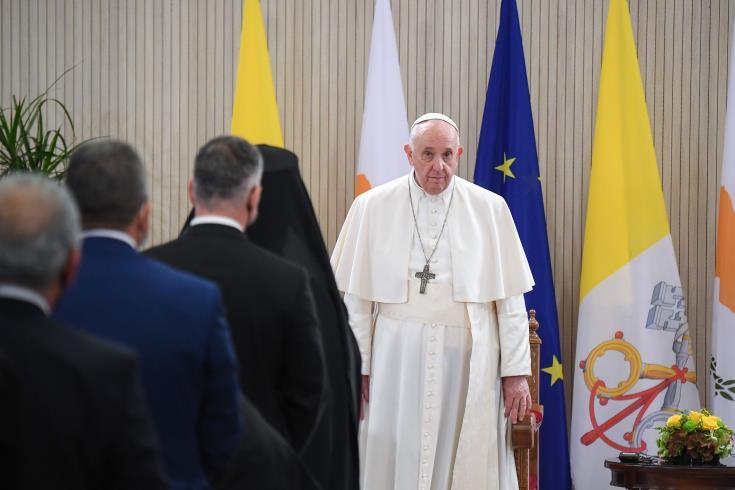 Pope Francis sent messages of unity, patience, peace and compassion noting that the Church is an open space in which all are welcomed.

In an address Thursday afternoon at a meeting with priests, Consecrated Persons, Deacons, Catechists, Ecclesial Associations and Movements of Cyprus at the Maronite Cathedral of Our Lady of Grace, the Pope expressed his sincere gratitude for the warm welcome and said that he is thankful for everything they are doing in Cyprus.

He said that the Church, as catholic, universal, is an open space in which all are welcomed and gathered together by God’s mercy and invitation to love.

"Walls do not and should not exist in the Catholic Church. For the Church is a common home, a place of relationships and of coexistence in diversity", the Pope said.

He made special reference to Saint Barnabas and his life and mission, noting that he was a great man of faith and wisdom who practiced great patience, the patience to accept what was new without rushing to judgement.

"His was the patience of discernment that is capable of perceiving the signs of God’s work in every place, the patience to “study” other cultures and traditions. Above all else, Barnabas had the patience of accompaniment", the Pontifex said.

In his address the Pope said that we need a patient Church, that does not allow itself to be upset and troubled by change, but calmly welcomes newness and discerns situations in the light of the Gospel.

"The Church of Cyprus has these same open arms: it welcomes, integrates and accompanies.  This is also an important message for the Church throughout Europe, marked by the crisis of faith. It does little good to be impulsive and tempestuous, nostalgic or querulous; instead, we do well to march forward, reading the signs of the times as well as the signs of the crisis", he said.

He also said that Barnabas and Apostle Paul, as brothers, journeyed together to proclaim the Gospel, even amid persecution. "Brothers can argue and at times fight. Yet Paul and Barnabas did not go their separate ways for personal reasons, but because they disagreed about their ministry, about how to carry out their mission, and in this regard they had different ideas", he said.

He also said that here in Cyprus there are many spiritual and ecclesial sensibilities, different backgrounds and histories, different rites and traditions and yet we should not experience diversity as a threat to identity; we should not be jealous or defensive.

"If we fall into this temptation, then fear grows, and fear gives rise to distrust, distrust leads to suspicion and then, sooner or later, to conflict.   We are brothers and sisters, loved by a single Father", he noted.

The ceremony at the Cathedral of Our Lady of Grace was attended by approximately 200 people. The Pope was welcomed by Joseph Soueif, the Archibishop of Maronites and Patriarch of Maronites Bechara Boutros al-Rahi.

Psalms were heard in Greek and Arabic. The Pope, after the ceremony, blessed four children and then headed to the Presidential Palace.

Pope arrived on the island this afternoon and will conclude his visit Saturday morning. From Cyprus the Pontifex will travel to Athens.