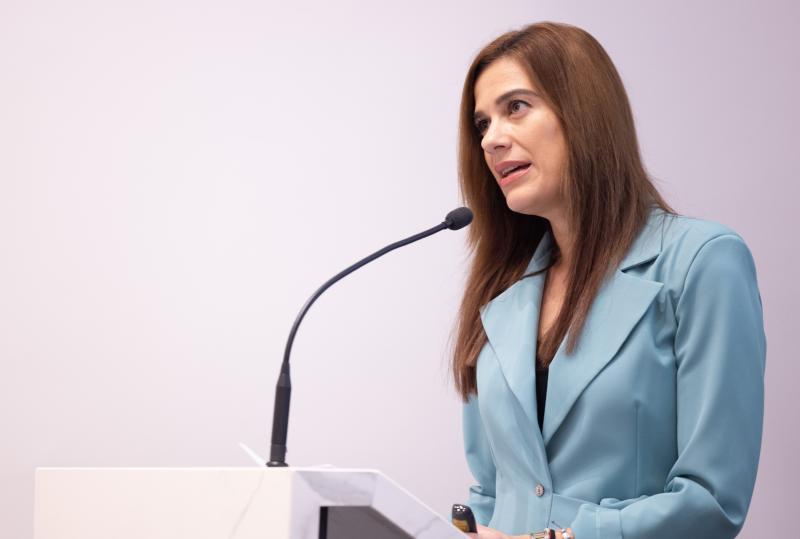 Minister of Energy, Commerce and Industry Natasa Pilides presented on Monday an Action Plan for the promotion of traditional cheese, halloumi, abroad aiming to enhance the brand name of the Cypriot PDO product and increase exports.

During the presentation the website halloumi.cy was also officially launched, with the aim of being one of the tools to inform importers and consumers abroad about halloumi.

The "Action Plan 2022-2024” will use a variety of communication and promotion methods, such as information campaigns through the Ministry's Trade Centers in 14 countries that cover a total of 42 markets, Pilides said.

In addition, advertisements will be placed in specialised publications and broadcasts, posts will be made on social media, the product will be linked with international culinary personalities, etc.

The aim, as Pilides added, is to make better use of the opportunities presented in the international trade for halloumi after its inclusion in the PDO list of the European Union.

Another goal is to increase the recognition of halloumi as an authentic Cypriot product in new promising target markets, such as the USA, Japan, Australia, Saudi Arabia, the UAE, Qatar, Kuwait and Bahrain, as well as enhancing its presence in existing markets.

In addition, the awareness of consumers abroad regarding the Cypriot origin of the product and the increase in halloumi exports for the benefit of employees, businesses and the Cypriot economy, will also be pursued.

The Action Plan also aims to highlight the history of halloumi, its tradition, the family character of Cypriot businesses that produce it, as well as its excellent taste and its culinary competitive advantages over other cheeses, including its unique quality not to melt at high temperatures, which allows it to also be consumed grilled or fried.

The website halloumi.cy, Pilides said, is currently available in English, Chinese, Japanese and Arabic, in order to address the new markets in which there are great prospects and it is one of the tools for promoting halloumi.

Visitors can learn about the history of halloumi, its PDO and trademark protection, its ingredients and nutritional value, how it is consumed and how it can be used as a raw material in cooking, etc. The website also informs those interested in importing halloumi in their country about their potential partners, as it also includes the Register of all producers who have received approval to produce halloumi under the PDO indication "Χαλλούμι (Halloumi) Hellim".

Currently halloumi is exported to more than 50 countries, with the main export markets being the UK, Sweden, Germany, Australia, Austria, Denmark and Poland. These six markets account for 81% of total halloumi exports internationally. From 2016 to 2021 halloumi exports increased by more than 30%.

Bureau Veritas has been appointed to make official controls of verification of compliance with the product specification for the Protected Designation of Origin (PDO) of “ΧΑΛΛΟΥΜΙ (HALLOUMI)/HELLIM” which is registered by the European Commission.

Replying to concerns expressed by President of Cyprus cheese producers Giorgos Petrou that they will have unfair competition with producers from the occupied areas of Cyprus, who will produce at a lower cost by importing Turkish animal feed which is prohibited from being imported into the EU, Agriculture Minister Costas Kadis, assured that the controls by Bureau Veritas will be very strict both at the producers in the Republic of Cyprus and the Turkish Cypriots producers at the occupied north of Cyprus. He also said that there are huge prospects and there's plenty of room for everyone in halloumi production

He added that they were following very closely what was happening in the occupied territories and in consultation with the European Commission if there is any distortion they will intervene immediately to correct it.