According to JCC the Road Tax Department contributed to the increase recorded in the Government sector in March because of the different deadlines compared to last year. 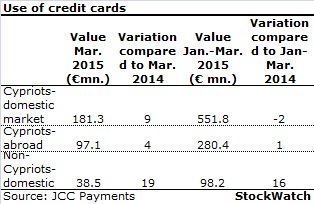 The overall monthly usage without the Government sector remained stable.

JCC data show that the use of credit cards by Cypriots abroad, including online shopping, increased by 4% at € 97.1 mn. The number of transactions fell by 1% to 926.2 thousand.

As for the non-Cypriots, the value of transactions increased in the third month of the year by 19%, reaching €38.5 mn. In February, the increase reached 14%.

An increase of 26% was recorded in the number of transactions which reached 410.7 thousand.