The value of credit card transactions by Cypriots in the domestic market fell by 2% to €165,4 mn while the number of transactions increased by 3% to 2.7 mn. 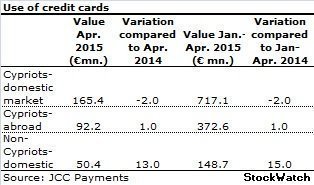 In March there was a rise of 9% in the use of credit cards due to payments to the Road Tax Department.

According to JCC, an increase was recorded in supermarkets while petrol, do-it-yourself and household stores, clothing, shoes and accessories stores as well as utilities, recorded a decrease.

The overall monthly usage without the Government sector fell by 2%, mostly driven by the drop in oil prices.

Despite the fall in the domestic market JCC data show that the use of credit cards by Cypriots abroad, including online shopping, increased.

The use of credit cards by Cypriots abroad reached €92.2 mn in April, recording an increase of 1%. The number of transactions fell by 3% to 841.5 thousand.

As for the non-Cypriots, the value of transactions increased in the fourth month of the year by 13%, reaching €50.4 mn. In March, the increase reached 19%.

A rise of 22% was recorded in the number of transactions which reached 523 thousand.

In the January-April 2015 period, credit card transactions of non-Cypriots increased by 15% reaching €148.7 mn.
Previous
Next