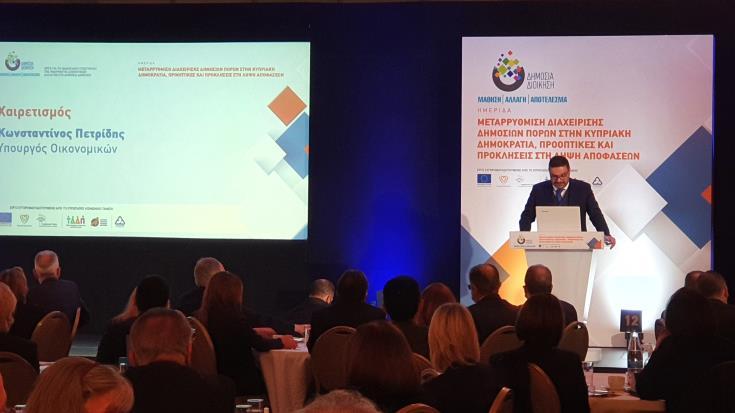 Cyprus Government and the country’s public service are accelerating the reform of public resource management, the first phase of which is expected to take effect in 2023.
Addressing  a conference entitled "Public Resource Management Reform in the Republic of Cyprus, Perspectives and Challenges in Decision Making" organised on Friday by the Cyprus Academy of Public Administration in collaboration with the Treasury of the Republic of Cyprus, Minister of Finance Constantinos Petrides stressed that the Government is committed to the effective management of public resources.

"The government remains committed, has invested resources, energy and has the will to achieve the goal of improving the management of public resources in a way that provides high quality and beneficial public services to all citizens," he said.

Petrides added that this change in commitment and mentality will maximise the benefit to the citizens and will ensure that every euro will be used appropriately for the benefit of the society.

The government wants "to learn to think and plan in the long-term, to take better decisions and to explain in an understandable way, where citizens` money is spent and why," he said. "We want to show the importance of accountability by presenting the overall results and implications of each policy and action," he added.

The Finance Minister also said that sound public financial management, fiscal transparency, government accountability and the involvement of civil society, strengthen citizens` trust in the state. This trust, he pointed out, is very important, as it can encourage investment and growth, accelerate the improvement of creditworthiness and risk assessments and be a catalyst in the effort to keep new talent in the country.

Accountant General of the Republic, Rea Georgiou, presented the Strategic Reform being forward by the Treasury, in cooperation with the Finance Ministry, the Public Service Committee, the Department of Public Administration and Personnel and the Department of Informatics.

Georgiou said that the reform revolves around the introduction of a new software system, Enterprise Resource Planning (ERP). The project is planned to be implemented in two stages. The first one concerns the financial management and is expected to begin in January 2023. The second phase is planned to be implemented in January 2024 and it has to do with payroll and human resource management.

The Accountant General said that the new system will help digitise manual processes and automate repetitive and time-consuming processes. This will free human resources that can be utilised in a way that adds value, she added.

Additional benefits of the reform are expected to include the ability of decision makers for better planning, greater transparency in transactions and how the public interest is best served, she noted.

Finally, Georgiou said that for this project experts from IMF and OECD offer their know-how, along with the European Commission and the Ministry of Research, Innovation and Digital Policy.

Deputy Ministry of Research, Innovation and Digital Policy Kyriacos Kokkinos, referred to the major projects under his portfolio for a holistic digital transformation of the state and said that the e-government projects exceed a €170 million investment in the framework of the Recovery and Resilience Plan. He also referred to the efforts of his Deputy Ministry to create a platform that will allow electronic access to all public services.

In his presentation on the budget reform, Permanent Secretary of the Ministry of Finance, George Panteli, referred to the new way of drafting the budget on the basis of activities, through which the goals and priorities of each economic entity are defined, as well as the actions to achieve these goals.

On his part, Minister of Finance Greece, Christos Staikouras, presented the Greek experience in the Public Sector reform. He said that the reforms implemented in Greece will have a positive impact, especially in improving information and supporting more effective control, strengthening accountability in financial management, enhancing information provided to Parliament and supporting improvement of parliamentary budgetary dialogue.

In addition, the reforms will lead to the support of better coordination of government work, the strengthening of transparency in the budget sectors and enhancing the international image of Greece, for the long-term sustainability of public finances.