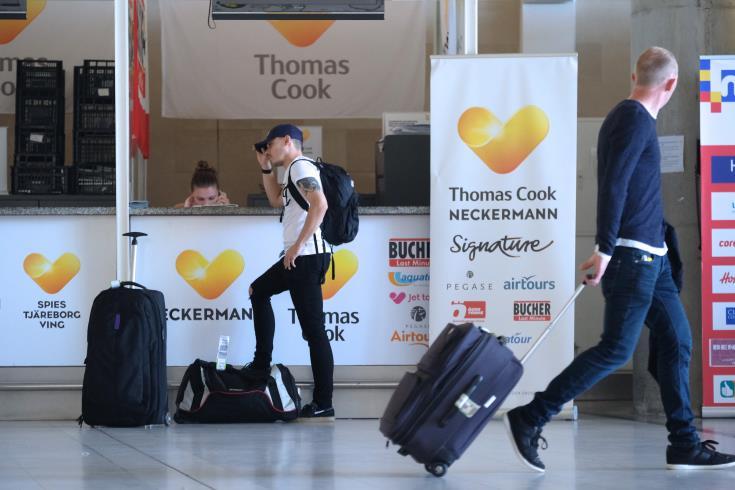 Tourism Deputy Minister Savvas Perdios, who presided over a broad meeting Monday morning, told the press that 250,000 tourists were visiting Cyprus on Thomas Cook packages annually with the income for the industry recorded to be 188 million euro. For the months of July, August and September, the losses for the hoteliers are expected to rise to 50 mln euro. According to the Minister, until the end of the tourist season, 45,000 extra visitors were expected to travel to the island.

Perdios said that 15,000 tourists who visited Cyprus making use of Thomas Cook holiday packages 50% of whom are British, 40% come from Scandinavian counties and 10% from Germany.

The Deputy Minister said that right now it is of the utmost importance to intensify our efforts so all the tourists can return to their countries. He said that under the circumstances we need to ensure that tourists who are stranded are well served and will leave Cyprus with the best of impressions.

Perdios also said that we need to also carefully examine the loss of all the thousands of tourists who had booked packages to Cyprus via Thomas Cook and how they could be replaced.

He pointed out that Thomas Cook’s share on arrivals was 5-6% spread in all areas of the island.  He added that Thomas Cook owes the hoteliers money for the bookings of July, August and September, pointing out that there is a huge possibility that this money will be lost.

President of STEK, Association of Cyprus Tourist Enterprises , Akis Vavlitis told the press that that this money owed to the hoteliers, which amounts to €50 mln, was going to be repaid end of October, November or even January of 2020 and the hotel owners know that it is lost.

He said that they are looking into ways to deal with the situation in cooperation with the Deputy Ministry but they will not ask for any money from the government.

The Deputy Minister said that the government acknowledged that 2019 and 2020 were going to be difficult years and with the collapse of Thomas Cook the efforts are stepped up so the losses are recovered. Perdios said that in November he will visit the London Tourist Fair and he will hold contacts with other tourist operators to make up for lost ground. He pointed out that we should not panic, but stressed that we all need to work really hard, cooperate and coordinate our actions.

Cyprus Hotel Association President Harris Loizides (PASYXE) said that at some hotels the bookings from Thomas Cook amount to 70-80% and for some others 100%, therefore the problems for these hotels are huge as they lost their income for July, August and September. He explained that the efforts to repatriate the British citizens are made by the British government but we need to make efforts for the rest of the visitors, from Scandinavian countries and from Germany.

On behalf of Hermes Airports, Eleni Kalogerou said that there were eight scheduled flights to Larnaka and Paphos airports which have been cancelled and one flight to Germany which will take off. She added that that the UK British High Commission’s efforts are underway for visitors to be able to return back to the UK. Kalogerou advised people to be patient and to wait for announcements for the scheduled flights that will transport them back home.

The UK High Commission has issued an announcement following the collapse of Thomas Cook saying that given these exceptional circumstances, “we will ensure the Government is working around the clock to support those impacted”.

The HC points out that it understands that this is a hugely distressing situation for Thomas Cook passengers, people with holidays booked with Thomas Cook and Thomas Cook staff, adding that the Civil Aviation Authority (CAA) and Government are working together to do everything possible to get people home.

“The Government is working around the clock to support all those affected, undertaking an emergency operation to repatriate more than 150,000 passengers stranded abroad.  This is the biggest peacetime repatriation effort ever seen in the UK, and is hugely complex. We are working to secure aircraft from around the world to fly people home but we ask passengers to prepare for significant delays and disruption”, the press release reads. The passengers are advised to visit https://thomascook.caa.co.uk for more information.

Bank of Cyprus has also issued a statement saying that customers should first refer to the Thomas Cook website https://thomascook.caa.co.uk for further information and to arrange their ticket and travel packages.