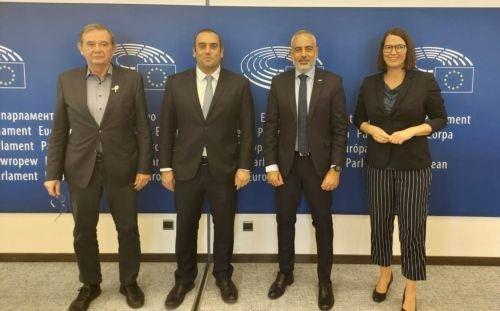 Minister for Transport Yiannis Karousos and Deputy Minister for Shipping Vassilis Demetriades discussed the implications of proposals discussed at the European Union level to reduce pollution from the transport sectors in Brussels, on Tuesday and Wednesday.

In a statement made during their visit, the two Ministers explained that if the proposals are implemented as they are, they are expected to bring additional costs to airlines which will be borne by consumers, while also increasing the cost of maritime transport and therefore the cost of imports to the country.

Karousos and Demetriades also noted that Cyprus has analysed the implications of these measures for all EU member states and is bringing forward specific proposals to mitigate this impact.

The two Ministers had a series of meetings with MEPs and officials from the European Commission regarding the "FitFor55" legislative package, which contains measures and proposals towards achieving climate neutrality for the European Union by 2050, which in turn requires achieving at least a 55% reduction in greenhouse gas emissions by 2030.

Karousos and Demetriades are also expected to continue discussion with other EU Ministers as work continues regarding the legislative package proposed by the Commission and amended by the Parliament and the Council.

In particular, Karousos said that they put forward the country’s concerns, as well as initiatives such as the creation of a "self-allowance mechanism" which would give incentives to airlines "to use more biofuel in a shorter time frame and at a lower cost."

Karousos said that Cyprus has carried out an analysis on how the legislative package will affect aviation and the country's economy as well as the economy of other EU member states in general. This study "is now being used as a reference point," he said.

Cyprus may "face a competitive disadvantage as the cost of a flight to Cyprus by 2035 will be much higher compared to third countries such as Egypt and Turkey," the Transport Minister pointed out.

In particular in the case of Cyprus, Karousos pointed out that airlines operating flights to the country will have to face additional costs of up to around 800 million euros after 2035.

These costs, he noted, "will be passed on to passengers, with negative consequences for tourism and the economy."

"Given this data and if our concerns are not taken into account, it is estimated that Cyprus will lose about 15 to 20% of its tourism and that there will be a reduction of 1.7% in the country's GDP per year,” Karousos said, adding that “by the time the climate neutrality target is reached in 2050, airlines will bear costs of up to 18 billion dollars".

In his statement, the Deputy Minister for Shipping reiterated that shipping is the second most important sector for the Cypriot economy after tourism. Demetriades noted that even though shipping must contribute to the reduction of emissions, the proposals as presented would have disproportionate costs for the country.

"As you know, all trade inputs to Cyprus - all goods - are transported by sea, and it is estimated that the cost of maritime transport will increase by around 25% by 2032," Demetriades explained.

Demetriades said that during contacts with MEPs, rapporteurs and representatives of the European Commission, the two Ministers highlight “the particularities of Cyprus as an island state and make suggestions for their improvement, especially regarding the issue of pollutant trading allocation."

"We ask that the mechanism for collecting allowances should change its philosophy and be based on the ship’s flag when it comes to ships with EU member state flags, and not on the state of the port of call," he said.

The Deputy Minister also said that Cyprus is in favour of setting up of "a separate fund for shipping, so that the revenues generated by maritime transport can be used to finance research projects aimed at finding and making available alternative fuels of non-fossil origin to the shipping industry, which will lead to the carbonisation of the sector".