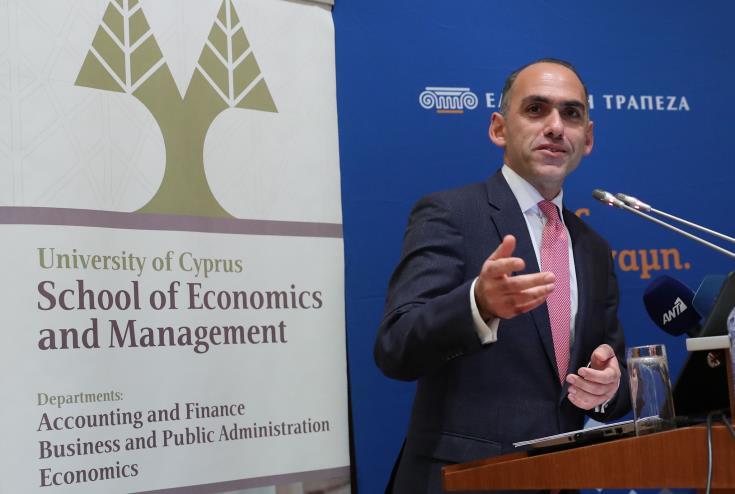 Cyprus Finance Minister Harris Georgiades warned on Tuesday over three “important” outstanding issues that should be handled with responsibility, that is the elimination of non-performing loans, the Supreme Court’s pending decision regarding civil service salary cuts and the sustainability of the National Health Scheme.

Georgiades was speaking during his fifth and final annual lecture at the University of Cyprus, before stepping down.

“We must handle responsibly some important outstanding issues, such as ridding the banking sector of non-performing loans for good, managing the court’s decision on public payroll and securing the sustainability of the National Health Scheme. But above all we have to continue the effort to adapt our economy to the conditions of our era and prepare our country for the changes to come”, he added.

A specific and measurable goal, he said, would be to increase Cyprus` per capita income to the European average and to achieve this we need to preserve and strengthen traditional sectors of the economy and encourage the development of new ones to expand the productive base. “What is even more important is to prepare the economy and the country mainly through investing in education for the massive rearrangement that the digital revolution is rapidly bringing about. Rapid technological developments will create opportunities but also major challenges for the labour market in any developed economy”, he noted.

The Finance Minister said that during its second term, Anastasiades’ government was focusing on promoting reforms, it has planned and budgeted hundreds of millions of investments in e-government and has created new structures and allocated significant resources to research and innovation.

He also noted that the Government has brought before the Parliament bills providing for reforms in the judicial system, the local government, the public service and for the set up of a new supervisory authority for insurances and welfare funds as well as a Ministry for Research, Innovation and Digital Policy.

Moreover, the Minister said that a bill providing for speedy licensing of investment projects will be submitted to the Cabinet tomorrow.

Georgiades who has announced that he would step down by the end of the year, noted that 2019 would be the fifth consecutive year of strong growth for the country and that the economy would register the best fiscal performance in the eurozone. The budget for 2020 remains in surplus, public and private debt remains high but perfectly manageable and in steady decline, the banking system has been strengthened and consolidated, we have easy access to international markets and the labour market is close to conditions of full employment, he stressed.

06/07
Retail trade rises in the eurozone, drops in Cyprus
06/07
Current account deficit at €0.9 bn
06/07
Polis Chrysochous: The most popular area for holidays and seaside properties
06/07
Authorities announce one new coronavirus case on Sunday
06/07
CySEC imposes fine of €650.000 to Commerzbank AG for market manipulation