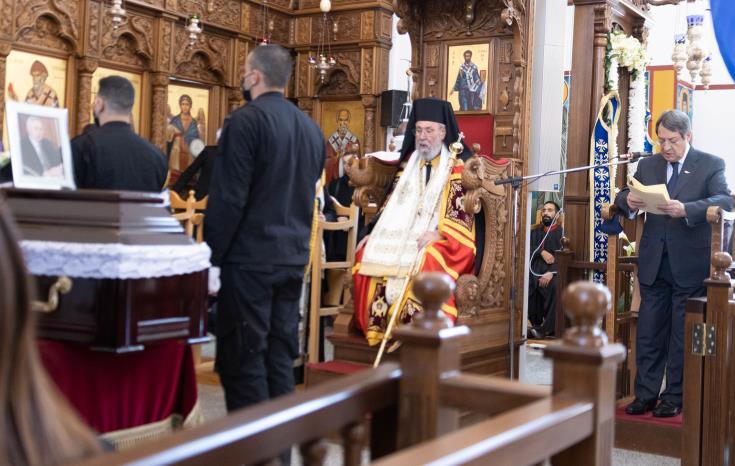 Cyprus on Sunday bid farewell to late Minister of Interior and Defence Socrates Hasikos who passed away last Monday at the age of 64 after a battle with cancer.

The funeral service was held at the church of Agios Nikolaos at Episkopeio village, in the presence of President Anastasiades, House Speaker Adamos Adamou, members of the Cabinet, the political leadership and other officials.

Because of the COVID measures, only the President of the Republic and the House President were allowed to attend the service inside the church, along with close family and relatives.

Today the flags at all public buildings are at half mast.

In his eulogy the President of the Republic said today he is saying goodbye to a man of great ethos, a friend and a collaborator with a personality characterised by selflessness, honesty and integrity, a man who fought for his beliefs.

He praised his political course in their common political party DISY and he made special reference to his fights for the reunification of our country.

Hasicos` daughter Anna Maria said goodbye on behalf of the family and her 2 brothers Frixos and Ioannis, noting that their father  taught them a great deal and he will be missed. She said that he was a beacon of light.

Former Minister of Justice Ionas Nikolaou spoke on behalf of his friends saying that Hasicos was a special man and honoured them with his deep friendship, honesty and moral qualities.

His father in law Frixos Koulermos said that for as long as he is alive he will be the protector of Hasicos` three children.

Hasicos was born in Nicosia but raised in the occupied village of Dikomo. He studied law in Athens and was elected MP with DISY. He was also vice president of the party and Minister of Defence and Interior.