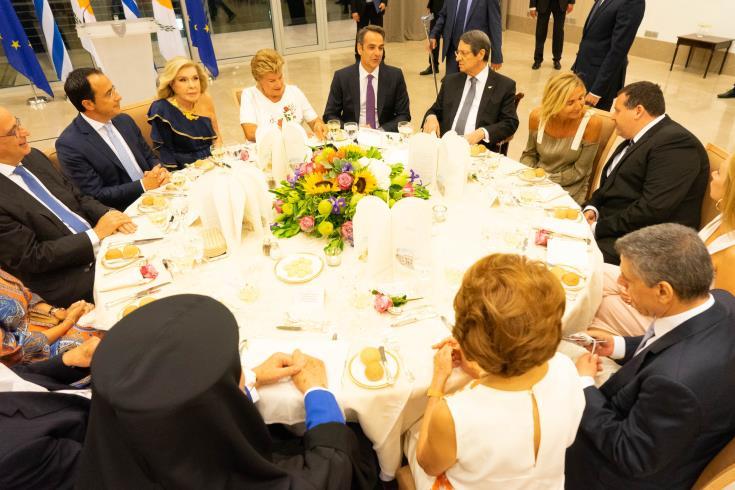 Greece and Cyprus will proceed with further coordinated actions as long as Turkey continues to dispute Cyprus’ sovereign rights in the exclusive economic zone, Greek Prime Minister Kyriakos Mitsotakis has said, as Cyprus President Nicos Anastasiades reiterated his determination to engage in a dialogue with Turkish Cypriot leader Mustafa Akinci, stressing however that there should be reciprocity from the other side.

Speaking during an official dinner in honour of Mitsotakis and his delegation accompanying him during his official visit to Cyprus, Anastasiades referred to the illegal actions of Turkey in the Cypriot EEZ as well as the entry of Turkish Cypriot and Turkish experts in the Varosha, a part of Famagusta that has been fenced-off since the 1974 Turkish invasion of Cyprus, noting that such actions “instead of building confidence widen the gap or the mistrust or uncertainty with regard to the other side’s intentions.”

He noted that during his meeting with Turkish Cypriot leader on August 9, they are supposed to discuss confidence building measures, including the fenced-off city of Varosha.

Anastasiades reiterated that the Greek Cypriot side has repeatedly declared that it respects all UN resolutions, including the provisions on political equality.

However, he made clear that the Turkish Cypriot side and Turkey cannot interpret these resolutions in a way that essentially “converting the goal, of political equality, to political inequality, granting such privileges in one of the two communities.”

The President expressed hope that with the support of Greece, the EU and other friendly countries “there will be interventions that allow hope for the shaping of those terms of reference that would enable the (UN) Secretary-General to convene a new conference for Cyprus, with a view to reaching a solution which would vindicate the whole Cypriot people.”

On his part, the Greek Premier reiterated that “the primary goal of Greek foreign policy is the resolution of the Cyprus question, a question which remains a question of invasion and occupation.”

“We have made clear to all involved our central and common view that no progress is feasible without the complete abolition of guarantees and the withdrawal of the occupying troops. We seek a free reunited and prosperous Cyprus, the lawful government of which will manage effectively and fairly to the benefit of the Cypriot people and its communities, the wealth of the island including proceeds from hydrocarbon exploitation,” he said.

He referred to the collaboration of the two countries in view of the Turkish provocations in the Cypriot EEZ noting that that “these coordinated actions will continue as long as Turkey insists on disputing the Republic of Cyprus’ sovereign rights, defying the international outcry.”

The Greek Prime Minister underlined what he called self-evident that “international law is the only and stable guide to peaceful coexistence,” adding that this “is a precondition for substantive talks and a viable solution.”

Describing the coming meeting between President Anastasiades and the Turkish Cypriot leader Mustafa Akinci as a positive development, Mitsotakis added “we hope the other side will come to the discussion with constructive intentions.”

Expressing hope that Turkey will realize the swift resumption of negotiations between the two communities and substantive progress in the talks will act to its benefit, Mitsotakis pointed out that “the escalating provocations comes in contrast with any declaration of intentions for the resumption of substantive dialogue.”

He also referred to the trilateral cooperation that have upgraded Greece’s and Cyprus’ role in the region as pillars of stability, noting that “increasing instability necessitates their further upgrading with the participation of other stronger allies.”

Concluding, Mitsotakis highlighted the cooperation of Greece and Cyprus in other fields for the prosperity of two peoples noting that bilateral economic and trade ties could be further enhanced through opportunities stemming from the two countries’ participation to the EU and the Eurozone.

Turkey issued in May a navigational telex, announcing its intention to start drilling off Cyprus until September 3. Since May 4, the Turkish drill ship “Fatih” is anchored in an area that falls within the EEZ and continental shelf of the Republic of Cyprus.

A second Turkish drill ship, “Yavuz”, is also off the island’s eastern coast.