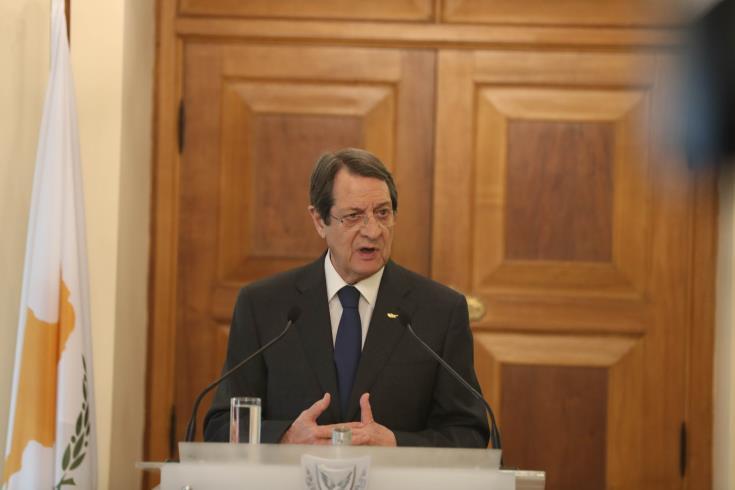 The President of Cyprus Nicos Anastasiades says that the interests of the country must prevail over party considerations and slams main opposition party AKEL over its “obsession” to remove him from power.

In a written statement, President Anastasiades notes that “the passion of the leadership of AKEL to remove me from power turned, unfortunately, into an obsession and therefore I do not intend to get involved in this slanderous slope they are following.”

He added that daily efforts by AKEL to question the capacity and integrity of the Unit for Combating Money Laundering (MOKAS) is unacceptable. The President says that MOKAS is launching an investigation, despite the fact that a report cited by AKEL says verbatim that “the documents do not contain any specific evidence that the firm or its employees broke any laws or committed any crimes.”

On August 14, the Organised Crime and Corruption Reporting Project or OCCRP reported a story, saying that a law firm established and co-owned at the time by President Anastasiades facilitated transactions with companies that are part of the Troika Laundromat, a secretive financial vehicle that has been used to carry out financial crimes. Reacting to the story, the government had said that the report acknowledges that President Anastasiades has no relation to any violations of law. On Tuesday, AKEL General Secretary Andros Kyprianou said that the President of Cyprus is being accused by OCCPR for very specific issues and AKEL expects that the President will provide answers to those issues. He also said that the country is continuously discredited by the actions of the President and the law firm that bears his name and that the President is obliged to respond to these accusations in a convincing manner.

In his statement, President Anastasiades says that AKEL ignores a series of measures adopted by the government, in order to restore back the trust and prestige of the state from the point of degradation it reached during the era the opposition was in power.

“The answer to AKEL is the reference to the website of the Central Bank, where a series of measures and the voluminous work of the government, the Central Bank, the supervisory authorities and the House of Representatives are recorded, under the title ‘Prevention and suppression of money laundering activities and financing of terrorism’” the President says and points to the relevant webpage https://www.centralbank.cy/en/licensing-supervision/prevention-and-suppression-of-money-laundering-activities-and-financing-of-terrorism-1 .

Furthermore, he says that the government was attacked by AKEL for the measures it took to shut down shell companies.

“I want to repeat my call that logic needs to finally prevail. The interests of Cyprus must prevail over party considerations. At the same time, I want to make clear that similar attitudes disrespect the democratically expressed will of the people in February 2018, when 58% gave me a strong mandate to govern the country until 2023” the President notes.

He says finally that he has a five-year term mandate, which will change in 2023 through democratic processes and not through party directives.