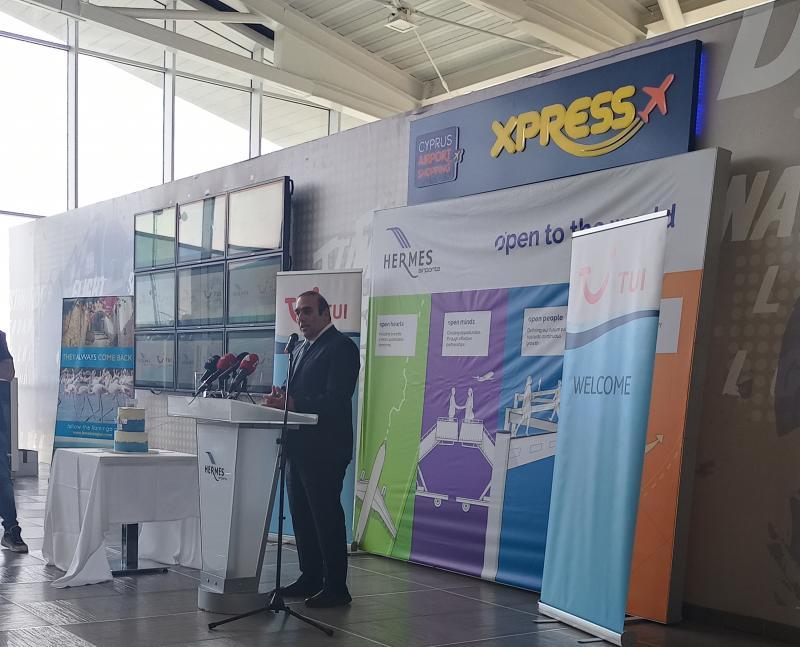 It is estimated that in 2022 there will be 50% more passenger traffic, arrivals and departures, in Cyprus than in 2021, Minister of Transport, Communications and Works Yiannis Karousos said today, adding that plans and incentives are being prepared to attract cruise ship tourism to the island.

In a statement at Larnaca Airport, the Minister described the day as "very important" since he said "a valuable partner of Cypriot tourism and aviation in general for Cyprus, which is the TUI group has decided that it will name one of its planes ‘Larnaca’, which proves the importance that the largest tourism company and tour operator in the world shows and its confidence in the city of Larnaca”.

"I want to send the message that although we expect to lose about 1.6 million passenger traffic, arrivals and departures, yet the numbers and figures show that we will have a 50% increase compared to 2021," he said.

According to Karousos, "there are available seats and destinations, but for this project to succeed it takes a collective effort, not only from the government and the airport operator, but also from the tourism industry and I expect that they will do so. In France, for example, there are 20 flights a week, whereas a few years ago there was no air connectivity at all."

Responding to a question, the Minister said that "last June at the European Union Transport Council we took an initiative and we submitted the Declaration on Air Connectivity in which we asked from the European Commission to give us the necessary tools to support the air connectivity of Cyprus, taking into account the citizens, the environment and air connectivity."

With great satisfaction, Karousos, continued, "we have seen that several countries have indicated that they will co-sign this Declaration, a total of 14 countries, including Italy, Greece, Spain, the Baltic countries and Poland and in the coming months a Conference will be organised where the Transport Ministers who support this Declaration will be invited to have the official signature ceremony in Cyprus".

In response to a question, the Minister of Transport replied that "Cyprus is a good example of how to deal with crises and especially crises related to air transport." As he pointed out, "we have proven this because if we compare some statistics in 2019, which was the best period in terms of passenger traffic and tourism we have ever had, compared to 2021, we will find that we had more destinations available last year compared to 2019."

"Immediately after the war broke out in Ukraine we also took measures and the Deputy Minister of Tourism is touring countries in order to promote Cyprus and to have an increased flow of tourists from countries with which there is a flight connection," he said.

At the same time, the Minister expressed confidence that "we can increase the occupancy of aircraft from these countries so that we can, to the extent possible, make up the loss created by Russia and Ukraine."

In fact, he added, "we are now preparing specific plans and incentives to attract more cruise ships to Cyprus, since in 2021 we had the most cruise ships coming to the ports of Cyprus or ships based in our country, in order to make up for any reduction in this sector from Russia and Ukraine."