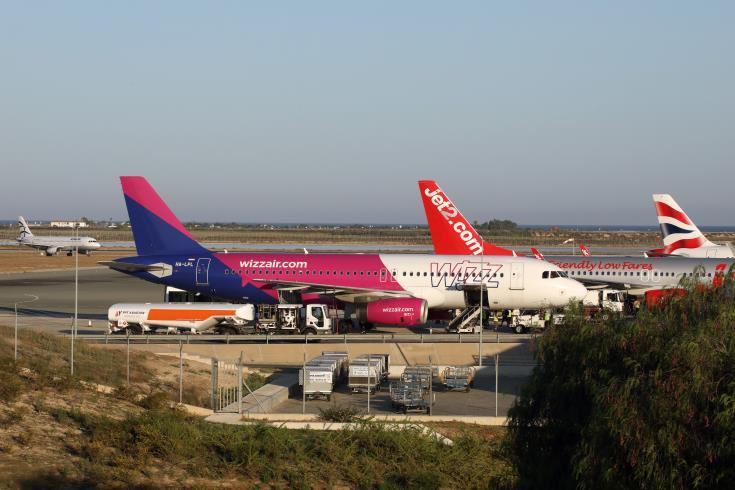 Amid the coronavirus pandemic Cyprus has made the most of all windows of opportunity reaping very good results in passenger traffic and flights, Minister of Transport Yiannis Karousos said on Thursday, on the sidelines of an event organised by the Flight Safety Foundation Mediterranean (FSF – MED), where experts voiced concerns over the use of an illegal military airport in Turkish occupied Lefkoniko as a permanent base for Turkish drones.

In statements to the press, the Minister said that “Cyprus in the midst of the coronavirus has exploited all windows of opportunity with some very good results in passenger traffic and flights”. He said that 62 airlines use the island’s two international airports this year and 157 routes are operated.

Karousos noted that the biggest challenge facing the aviation industry is related to the environment and the implementation of the European Commission’s Fit for 55 package, intended to facilitate a European Union greenhouse gas emissions cut of 55% by 2030. This, according to the Minister, will result in a significant increase in the cost of air tickets and will, in turn, adversely affect Cyprus.

Referring to efforts to improve air connectivity in Cyprus, the Minister said that Cyprus has drafted and submitted to the EU a Declaration on Air Connectivity already supported by seven EU member states, while two more have expressed their intention to sign it. The Declaration, he said, is aiming at extending beyond 2021 the temporary support provided to the air transport sector with regard to connectivity.

Addressing the event organised by the FSF-MED, Karousos said that in 2020, Larnaka and Pafos International Airports jointly handled a total of 2,312,697 passengers, in comparison to 11,273,748 passengers in 2019. The Government of Cyprus has sought to tackle this discrepancy in traffic-numbers by adopting measures, he said. In particular, an incentive Scheme fully funded by the Republic of Cyprus and addressed to all airlines, has been implemented with the aim of re-establishing the connectivity of the island. The duration of the scheme has been extended until 31 December 2021 and it is expected to provide aid of €8.8 million as an Incentive Scheme towards airlines.

Moreover, a loan of €22.2 million to Hermes Airports Ltd, the operator of Cyprus` Airports, has been granted as a measure undertaken by the Cyprus Government to remedy the serious effects on the economy resulting from the outbreak of the Covid-19 pandemic.

FSF – MED Executive Director Christos Petrou said that violations of Nicosia FIR by Turkey inevitably create serious risks to flight safety, since the International and European safety regulations are not followed. “In fact, these risks will increase, if Turkey implements its intention to establish a base for drones at the illegal Lefkoniko airport”, he noted.

He also said that the Ankara Control Centre refuses to communicate with the Nicosia Control Centre as provided by international regulations and that the illegal Control Center in the occupied areas of the Republic of Cyprus, interferes with flights within the Nicosia FIR, thus creating confusion for pilots. Moreover, the Turkish Air Force violates the airspace of Cyprus and the FIR, he said.

To eliminate these dangers, Petrou said that the Foundation, together with other European Organisations, is working on a proposal for an important regional project concerning aviation safety in the conflict areas of the Middle East, that is Iraq, Syria, Libya, Lebanon and Yemen. The proposal, he said, will strengthen Cyprus’ regional role in aviation. He added that the Foundation has submitted a specific proposal that could generate several millions for the economy, create jobs and enrich the tourist product of Cyprus.