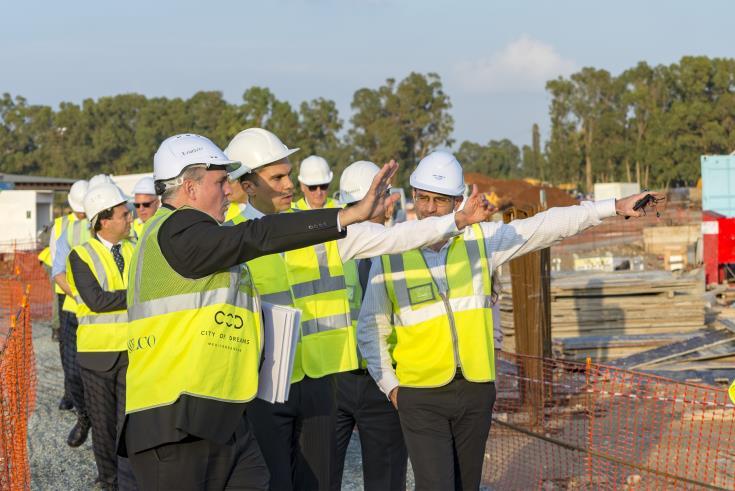 The operation of the polythematic casino-resort "City of Dreams Mediterranean" is of particular importance for our tourism and for dealing with the problem of seasonality, Cyprus` Deputy Minister of Tourism, Savvas Perdios, said on Friday.

Perdios visited the resort`s construction site and was briefed on the progress so far. Construction work is expected to be completed in the last quarter of 2021.

In statements, the Minister said he was impressed by the project`s size "because on paper everything seems smaller than in reality," and added that we need to comprehend its significance for the country`s economy and tourism.

The consortium`s decision to invest in Cyprus, he said, made the Deputy Ministry change its approach in the National Tourism Strategy, since, as he explained, the casino-resort will not just attract tourism from Europe, but also from the Middle East and the Gulf.

"It was this momentum which helped us include these countries in our own National Tourism Strategy and it was something very important," he noted.

The project, Perdios added, is expected to help deal with the problem of seasonality and also boost tourism at a time when the number of tourist arrivals in the island shows a stabilisation tendency due also to the great competition in the Eastern Mediterranean by countries such as Turkey, Egypt and Tunisia.

In a welcoming address earlier, Senior Executive Director of City of Dreams Mediterranean and Cyprus Casinos C2, Craig Ballantyne, expressed his satisfaction with the progress achieved in the construction work. Melco`s goals are intrinsically linked with those of the Cyprus government, so that the island can become an all-year-round tourist destination and in order to ensure sustainable economic growth, he noted.

The project, he said, is expected to create about 4,000 jobs during its construction phase and about 2,400 permanent jobs once it is completed.