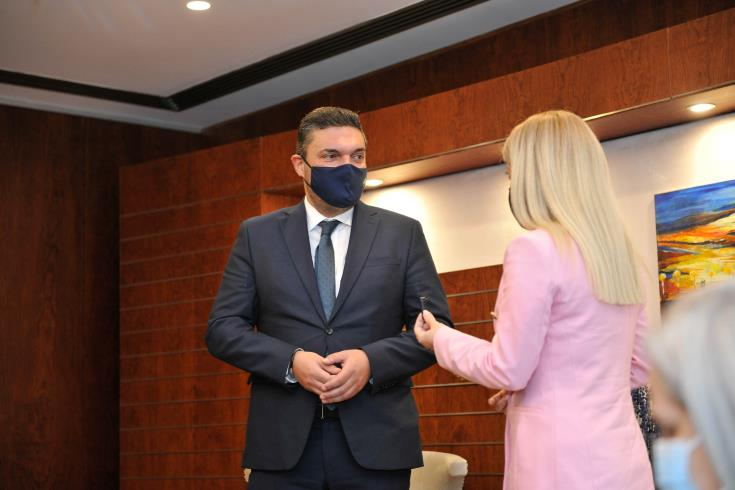 The 2022 state budget provides for a significant correction of the fiscal deficits accumulated during the Covid pandemic, as Cyprus moves from recovery to growth, Minister of Finance Constantinos Petrides said on Thursday , handing over the state budget to Annita Demetriou, President of the House of Representatives.

Petrides said that Cyprus forecasts a “significant fiscal correction” as the budget deficit is projected to decline to 1.5% of GDP compared with an estimated 5.1% in 2021 and 5% in 2020, due to the increased public spending to support employment and the real economy during the Covid downturn.

“This fiscal correction is needed, with a view to protecting public finances which during the time of the great crisis gave the opportunity and the capacity to support the economy and the workers, averting the collapse during the pandemic”, Petrides said speaking to the press.

Following the outbreak of the pandemic, the EU has suspended its fiscal rules until 2022, invoking the Stability and Growth Pact’s escape clause for the first time ever. Euro area Finance Ministers will begin a discussion as to when the block’s fiscal rules will be reinstated.

“It was a deliberate decision, its not just what is allowed by the (EU) fiscal framework, we see it as a matter of political responsibility in managing the economy” he added.

Furthermore, Petrides said that according to the FinMin’s projections, GDP growth will exceed 5.5% in 2021 compared with 5.1% contraction in 2020, while the 2022 growth rate is estimated at 4% assuming full absorption of the €1.2 billion of Cyprus’ Recovery and Resilience Plan.

He added that the 2022 state budget provides for in increase of 10% in development expenditure and contains mature projects such as the new archaeological museum, irrigation projects, road infrastructure, green growth and digitisation.

“The budget includes the provisions of the Recovery Plan which we believe fully complies with the new growth model for a sustainable growth which we have designed and announced,” he said, adding that he is sure that the Parliament will join forces with the government in passing the reforms “that would move Cyprus to the new era.”

Asked whether the debate on this year’s budget will have the same problems that emerged in 2021 when the initial budget was rejected by the Parliament, Petrides said no one, neither the government nor the political parties want the repetition of last year’s phenomenon.”

“I am optimistic that we will return to the regular understanding we had since 1960 and this is the spirit I see based on the parties’ stance so far,” he added.

On her part, Demetriou said that this year’s budget is even more important as Cyprus emerges from the Covid pandemic.

“Therefore, the budget should be supported for an additional reason,” she said, noting that the parliament should also support the reforms included in Cyprus’ national Recovery and Resilience Plan.