The proposed 2023 state budge is increased by €500 million 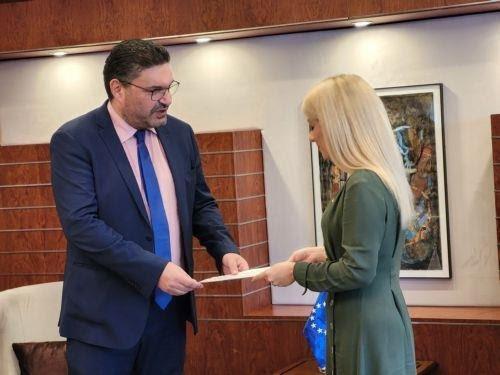 The proposed 2023 state budget submitted by the Minister of Finance, Constantinos Petrides to the President of the House, Annita Demetriou, on Thursday, is increased by €500 million compared to the last budget.

This is the final state budget to be submitted by the present Government and according to Petrides, it adapts to the context of the new international economic crisis and provides for increased operating, development and social spending, due to inflation, but also for a less spending on serving public debt interest.

The Minister of Finance handed over the accompanying letter regarding the budget to the House President, in her office, as the budget itself is submitted electronically.

"I am moved, because it is the last budget submitted by the Government of the last ten years", said Petrides, adding that the first budget was also submitted during a crisis. "The last budget is submitted again under crisis conditions, not of an endogenous, but an international one. It is a budget full of 'weapons' to deal with the crisis", he added.

He clarified that, despite the crisis of the pandemic with two consecutive lockdowns and the current crisis, this budget is increased by a lot, compared to last year, by approximately €500 million.

"It is increased in order to shield the growth, which is our response to the crisis", he said, explaining that this is why development spending is up by about 12%, while social spending is also up by about 4%, after having been strengthened already in recent years due to the minimum guaranteed income, the General Healthcare System and various allowances", he noted.

"Of course, it is a budget, which is also affected by inflation. The operating expenses of the state are increased by 15% due to inflation, which also affects public finances", he underlined.

Petrides concluded that "times are uncertain and difficult. It is a budget that gives the guarantees to move forward, but the right policies are needed so that it can be used properly and I am sure that, following parliamentary scrutiny, we will have this tool to move forward as well."

"Prudent fiscal policy, this is what our state needs, for the benefit of the citizens", noted the President of the Parliament, thanking the Minister and describing the submission of the budget as a "supreme legislative act". She added that it is very important that a surplus budget is delivered. "We will look at it extensively in the competent parliamentary committees."

Demetriou also said that during her time in Parliament she observes an "improvement of public finances" and noted that "especially now that we all realize that it will be a difficult period financially, due to the external factors that also affect Cyprus, I believe that the Republic of Cyprus should be shielded to be able to face this crisis as well."

In the letter delivered to the President of the Parliament, the Minister of Finance stated that "despite the difficult fiscal conditions due to the effects of the coronavirus pandemic and the continuation of the war in Ukraine, through the proposed budget seeks to contain public spending, without affecting the implementation/continuation of important projects, the completion of which is expected to make a significant contribution to the economic development of the country and, by extension, to the improvement of the citizens' standard of living".