Parliaments’ role is crucial in tackling the climate crisis 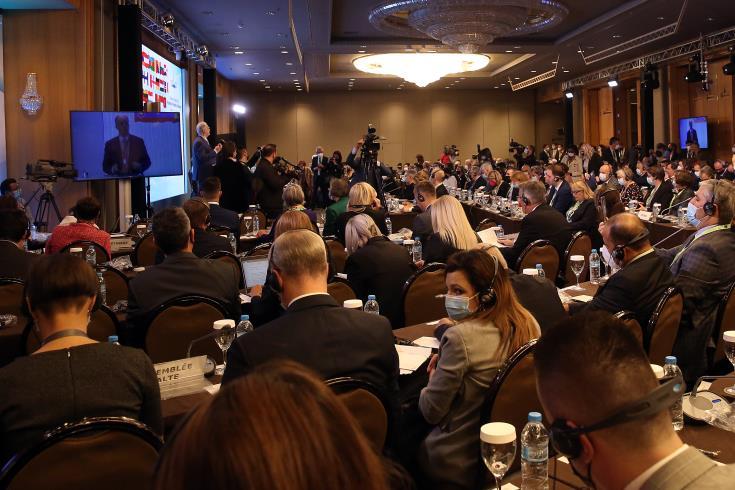 President of the Cyprus House of Representatives Annita Demetriou highlighted the escalation of the climate crisis and the need for Parliaments to take action to curb it, during her speech in a session on the role of national parliaments in tackling climate change, held in the framework of the European Conference of Presidents of Parliaments in Athens.

Demetriou noted that all Member States and the international community have placed environmental issues at the top of their priorities. In this context, she expressed the hope the upcoming United Nations Climate Summit in Glasgow to yield positive results.

Furthermore, the House President stressed that the role of parliaments is crucial in finding timely, effective, and lasting solutions to help stem the climate threat. The devastating fires experienced by Cyprus last summer showed that the Eastern Mediterranean region is disproportionately affected by extreme weather events due to increasing heatwaves and prolonged drought, Demetriou pointed out.

"We can no longer ignore or postpone corrective measures to protect the environment," she said, reminding that future generations will have to face even greater environmental disasters.

The President of the House of Representatives also stressed the need national parliaments to explicitly recognize the right to a healthy, clean and sustainable environment as the first important step in promoting a new generation of rights in the national legal order. Furthermore, she highlighted the need to introduce strong legislation to control and monitor environmentally damaging private sector activities, while noting that national strategies should invest in the transition to a circular and green economy.

Demetriou referred to the need for enhanced international cooperation towards the adoption of an Additional Protocol to both the European Convention on Human Rights and the European Social Charter, in order to provide the European Court of Human Rights with the appropriate legal framework to guarantee and protect the human right to a healthy and sustainable environment.

Highlighting the key role of national parliaments in incorporating appropriate safeguards in national legislation to guarantee the social, labour, and economic rights of all citizens, without exclusion, Demetriou stressed that the gender dimension should also be taken into account. Climate change does not affect women and men to the same extent, due to the fact that women are still under-represented in decision-making centers, she said.

Demetriou noted that a large part of the funds of the Recovery and Resilience Plan "Cyprus - Tomorrow" will be invested in the green transition. She also referred to the initiative undertaken by the Republic of Cyprus, in cooperation with other countries of the Eastern Mediterranean, to draw up a regional Action Plan to address the effects of climate change, while also highlighting the measures implemented by the House of Representatives to protect the environment.

"In the face of this huge challenge posed by the climate crisis, we must all be vigilant. By joining forces and dynamically promoting cooperation and synergy, national parliaments must play a catalytic role in shaping and implementing the right strategies to deliver a better future to future generations", Annita Demetriou concluded.