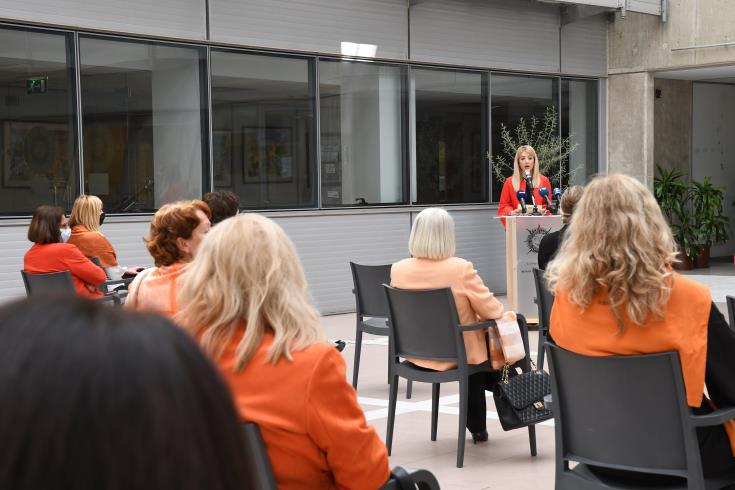 Cyprus remains relatively low in the rankings of the EU’s Gender Equality Index, which is indicative of the necessity to improve women’s representation in politics, leadership and decision-making positions, President of the House of Representatives, Annita Demetriou has said.

With the participation of current and former Members of Parliament, women members of the diplomatic corps in Cyprus, women officials and representatives of women`s organizations, a special ceremony for the "Orange the World" campaign was held on Friday, in the House of Representatives, aiming to raise awareness on violence against women.

Demetriou said that she has set gender equality and the rights of women and girls very high in her agenda.

“It is time to talk openly and to be proactive on the issue of gender-based violence. In this respect, the initiative 'Orange the World' is an excellent opportunity to raise awareness, to mobilise society and stakeholders to take a stance against such deplorable phenomena that need to be eradicated from our society”, she said.

As Demetriou said, the House of Representatives has been involved in specific initiatives and activities in the context of promotion of gender equality and the protection of women’s rights.

“Along with my colleagues in the House of Representatives, and particularly the women Members, most of which are present here today, we are continuously working with determination to promote gender equality, to ensure that women and girls are empowered, and to raise awareness regarding gender-based discrimination and violence”, she said.

She added that important steps have been taken in the legislative field. She pointed out that she was among the MPs who tabled the legislative proposal that led, in 2020, to the passage of the Law on Combating Sexism and Sexist Behaviour that criminalises sexist acts as well as online sexism.

In Spring 2021, she continued, two further, significant legislative acts were promulgated: the Law on the Protection from Harassment and Stalking that establishes a comprehensive framework in civil and criminal law regarding the said phenomena of harassment and stalking and the Law on the Prevention and Combating of Violence against Women and of Domestic Violence that harmonises Cyprus with the provisions of the Istanbul Convention. The Law addresses offences of a wide nature including physical, psychological and financial violence, as well as the dissemination of sexual and pornographic material. What is more, the Law aims at acting preventively and focuses on education, training and awareness-raising among professionals.

Referring to the sharp increase in femicide cases worldwide and in Cyprus, she said that she proposed legal reforms that will lead to the introduction of the criminal offence of femicide. The reform, she noted, aims at enhancing the protection that women and girls are afforded by the law, while also illustrating the severity of such offences that constitute acts of violence towards women.

Demetriou also said that she addressed a letter to Presidents of Parliaments and International parliamentary organisations, urging them for joint action to protect the human rights of Afghan citizens, especially those of women and young girls, and to provide humanitarian assistance to them.


The House of Representatives, she said, is fully committed to the goal of achieving substantive gender equality and eradicating violence against women and girls.


“We are ready to contribute effectively, both domestically as well as at the international level, to promoting women’s rights. We must all stand united, regardless of our gender, sexual orientation, age or origin, to ensure that violence, abuse and inequalities are eradicated from today’s society”, she noted.


Finally, she said she was confident that the “Orange the World” initiative will raise awareness on women’s rights for the eradication of gender-based violence.