These amounts include the cost of employment of the dozens of associates, which as known, is borne by taxpayers.

Yesterday, the general director of the parliament Vasiliki Anastasiadou, said during the presentation of the budget of the House that the state funding of political parties for 2016 is increased due to the elections and because it will cover the number of additional parliamentary partners for parties.

At the parliament, 69 partners are currently working on behalf of parties and MPs. The cost of their remuneration is borne by the state and amounts to € 2,7 mn annually.

According to the general director of the parliament, apart from the amount regarding the operating cost of political parties, an increased amount was included which is attributable to the increased sponsorship given to parties due to elections.

Political parties are planning to change the way of sharing the state sponsorship for major parties to receive larger amounts.

Today 22% of the state sponsorship is distributed horizontally and 78% proportionally. The total amount is decided by the Cabinet.

According to the Financial Management Service of the parliament, the government sponsorship to the seven parliamentary parties amounted to € 4,1 mn in 2015, remaining the same since 2012.

In 2015 a sponsorship for the Citizens’ Alliance was added due to the admission of the party in parliament. 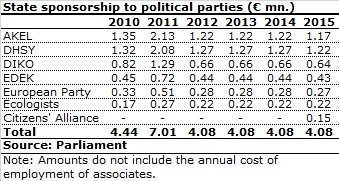 In 2011, which was also the year of parliamentary elections, the state subsidy for parties amounted to €7 mn. This amount does not include the cost of employment of parliamentary associates for MPs.

For 2015, the largest amount of state subsidy was directed to bigger parties DISY and AKEL which received €1,22 mn and €1,17 mn respectively.

Despite the generosity of taxpayers, parties do not communicate sufficient information on the use of this money or other income from contributions and other activities.
Previous Article
Next Article 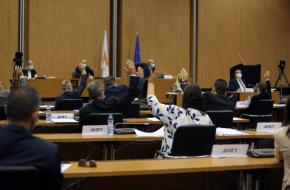 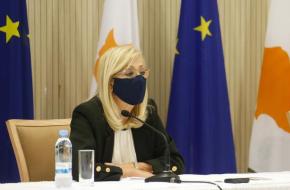 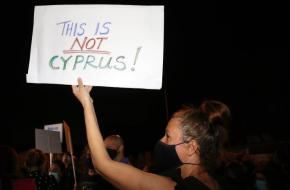 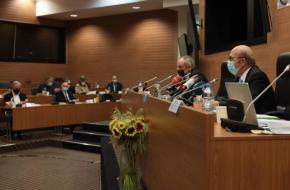